A panoramic view of apartments in Nairobi. Middle-income housing in Kenya is expected to ease in 2020.

The current housing deficit in the Middle Income Housing (MIH) segment is expected to decrease this year.

According to a new report released by research firm Sagaci, the Middle Income Housing segment is expected to get back to a balance by the end of the year owing to an increased supply of units by developers in the market.

On average, 11,500 households will join the middle-income segment each year until 2024, largely driving the demand for housing in this segment.

While the absolute growth is expected to marginally decline between 2020 and 2022, the supply of new units in Middle Income Housing nodes is expected to cumulatively grow to match the growing demand for the same, says the report.

The research was commissioned by Actis, a leading growth markets investor across Africa, Asia and Latin America to provide updated data on the middle-income housing segment where it has invested.

This joint venture aims to bridge the existing gap in the market for quality middle income housing.

Commenting on the report, Mi Vida CEO Chris Coulson says there remains an underlying demand for quality homes in the middle-income segment which has seen Mi Vida sell 35% of the first phase in less than four months since its launch.

“To help underpin the brand and to build market confidence we opened a sales office with show apartments for the public to come and learn more about the product, amenities and great value,” he said during a meeting with journalists on Thursday.

Despite the growing number of developments, the supply of middle-income developments in Nairobi is expected to decrease in number of units in the coming years by 5.5%.

The report estimates an average of 3,000 new middle-income housing units will be supplied each year in Nairobi in the next 4 years.

The forecasted supply is still concentrated within the traditional premium nodes such as Westlands, Parklands, Kilimani, Lavington and Kileleshwa. This will lead to among other things congestion in the aforementioned areas thus decreasing their attractiveness

This creates an opportunity for more developments in emerging nodes such as Kasarani, Kiambu road and Ruiru to meet a growing demand for middle-income housing.

Other key growth areas like Nairobi West, Roysambu and Ruaka are predominantly rental markets, while Kileleshwa, Kilimani, Loresho, and Mombasa road areas are sales markets with most units being on sale.

Mr. Coulson says Mi Vida is on course and has already launched its first project within Actis’ Garden City.

This will be constructed in three phases totaling 624 residential units ranging from one, two and three bedroom units constructed on a 4.5 acre parcel of land adjacent to the popular Garden City mall.

Over 1 acre will be dedicated to green spaces and amenities. Construction of the first phase, comprising 208 units is expected to commence soon. 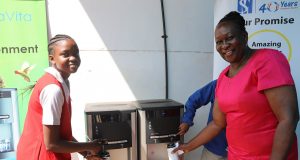 Top School Rules Out Plastic Water Bottles to Cut Pollution
Makini School is doing so in partnership with Aquavita, a…