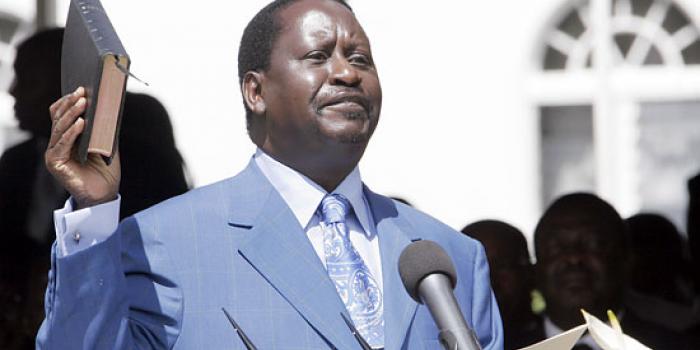 Just a week to the planned swearing-in of NASA coalition chiefs Raila Odinga and Kalonzo Musyoka, their chosen venue for the controversial event has been closed by city authorities in a surprise development that’s bound to raise political temperatures.

In a public notice published today, the Nairobi County governor’s office announced the temporary closure of Uhuru Park for renovation and improvement works, which City Hall says targets improving the state of the recreational amenity.

The notice indicated that the grounds will not be accessible to members of the public and will not be used for any gatherings from January 23, until further notice.

“Notice is hereby given to the general public that Uhuru Park is scheduled to undergo phased improvement works in order to enhance the recreational usefulness of its visitors,” the county acting secretary Leboo Ole Morintat says in the notice. “Consequently, the facility has been closed down to the public for any gathering and meetings with effect from January 23, 2018 until further notice.”

NASA side will see this as part of the government plot to frustrate their plans. Already, the Nairobi county government has granted permits to a church and the controversial Nairobi Business Community group to use Uhuru Park on January 30th, the date for Odinga’s swearing-in ceremony. The fate of this function is not clear.

On Monday, NASA co-principal Musalia Mudavadi said preparations for the ceremony are in top gear ahead of the D-day. There have been reports attributed to NASA insiders that they will not be holding the inauguration ceremony of Raila Odinga as people’s president at Uhuru Park grounds as earlier announced.

Gatundu South MP Moses Kuria, now seeming to be part of the group organizing a medical camp targeting to circumcise street, says the grounds needed to be well prepared for the exercise.

“Our colleagues from the Business Community have said it is purely a cultural event and let us not politicize this. We have secured the grounds. If you have anything to fear, keep away from to our event or have yours on a different day elsewhere,” said Moses Kuria during a press address by the groups.

Last year, plans to have Raila take oath were frustrated forcing the team to postpone the plan until this year. The Jacaranda grounds where the leaders planned to hold gathering parallel to the swearing in of President Kenyatta were barricaded police. Part of the Jacaranda grounds had been smeared with sewage.