From left: Director General of the Communications Authority of Kenya Francis Wangusi and ITU Regional Director for Africa Andrew Rugege at a past function. He says he was left in the dark about his replacement. [Photo/ITU]

Francis Wangusi says he will not hand over to Mercy Wanjau who was on Thursday morning named as the acting Director General of the Communications Authority of Kenya.

According to Wangusi, though his second term came to a close on Wednesday, he was not formally asked to hand over adding he only learnt about the elevation of Wanjau, who is the Director, Legal Services, when she was unveiled to the media by board chairman Ngene Gituku

He claims a few people who have vested interests in the communications regulator are the once who executed his removal.

About one week ago, the Consumer Federation of Kenya (Cofek) moved to court to block Wangusi’s appointment, arguing the CAK Board has no powers to elect a new director general saying the process should be left to an independent recruitment agency.

Human rights defender Okiya Omtatah in May stopped Information and Communication Technoly Cabinet Secretary Joe Mucheru from naming new board members. The tenure of the current 13 board members ended on April 19.

The board had advertised a vacancy in the top job but Gituku said Wanjau will serve in the role until a substantive replacement is named.

The Kenya Information and Communication Amendment Act 2013 that gave birth to the CA empowers the board to hire the director-general as opposed to the previous Act that bestowed the power on the ICT minister, who executed the mandate by picking one of three names submitted to him.

It is said that Wangusi had requested for an extension of his contract but the board favours a fresh recruitment in line with the law.

He has helmed the communications body for about seven years having over from Charles Njoroge in 2012.

While unveiling Wanjau, Gituku praised Wangusi for playing a key role in deepening Digital Financial Inclusion as well as promoting innovations in all sectors of the economy.

He described Wangusi as a transformative leader under whose watch the ICT sector realized significant achievements, including analogue to digital TV broadcasting that expanded competition in the broadcasting industry,

” There is no doubt Wangusi has made a mark in the sector and will remain an important footnote in the history of the ICT industry for a long time,” Gituku said in the statement.

”There is no doubt Mr. Wangusi has made a mark in the sector and will remain an important footnote in the history of the ICT industry for a long time to come,” he added. 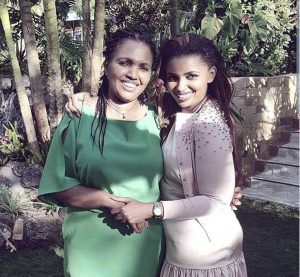