Veteran Journalist Naim Bilal. He has been appointed as Managing Director of KBC for a period of three years.

ICT Cabinet Secretary Joe Mucheru appointed Bilal, the current Director of Information, to take over from Waithaka Waihenya, who left in 2017, on a three-year contract.

“In exercise of the powers conferred by Section 5 (1) of the Kenya Broadcasting Cooperation Act, the Cabinet Secretary for Information, Communication and Technology appoints Naim Bilal to be the Managing Director of the Kenya Broadcasting cooperation for a period of three years with effect from 20th March 2019,” the CS said in a Kenya Gazette notice.

KBC has been reeling from a huge loan obtained from Japan several years ago, a situation worsened by financial mismanagement, lack of government support, pro-government editorial policies and interference over the years as well as competition from private players, among others.

In May last year, the broadcaster enlisted the services of PriceWaterhouseCoopers to competitively hunt for a new head. At the time, the broadcaster said it was looking for a candidate who had at least 10 years working experience, seven of which should have been in a senior management capacity in the media or ICT industry; Bachelors degree in social sciences, communication, marketing, business administration, law, engineering or its equivalent from a recognised accredited university and a Masters degree in the relevant field from a recognised university.

Bilal has also previously worked as the Judiciary’s director of public affairs and communications. 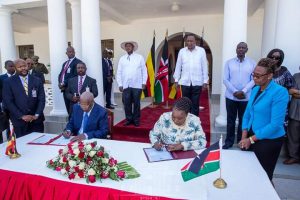 Kenya chokes at the negotiating table, again
Trade analysts opine that there is the common perception amongst…