Joe Kadenge. The 83-year-old legend's stroke comes as a huge blow to the family as they prepare to leave for the US to bury his daughter.

Kenyan football GOAT (Greatest Of All Time), Joe Kadenge has been admitted at the Nairobi Hospital after suffering a stroke on Wednesday evening.

This is the second time in a decade that the football legend has suffered a stroke. The former Kenyan International has also been ill over the recent years and was even visited by Kenyan Political bigwigs including President Uhuru Kenyatta and former prime minister Raila Odinga.

The 83-year-old legend’s stroke comes as a huge blow to the family as they prepare to leave for the US to bury his daughter. Kadenge’s daughter passed on in the States on Saturday. According to Joe’s son, Rodgers Kadenge, the legend started showing signs of a stroke when he received news of the death of his daughter.

“He started showing signs of suffering stroke on Tuesday and it must have been triggered by the death of my sister Eve who passed on in the US on Saturday,” Rodgers revealed.

Joe rose to stardom when he began his career in Zanzibar in 1957 during the glorious Gossage cup. He debuted his KPL career playing for Nakuru Combined (now Nakuru All Stars) and went on to play for Maragoli FC and later Abaluhya FC (now AFC Leopards). Kadenge spent a huge share of his playing years with Abaluhya FC winning multiple Kenyan League titles.

Kadenge made himself a household name due to his prowess dribbling skills and goals scored for Harambee Stars. A famous phrase ‘Kadenge na Mpira’ came about due to Leonard Mambo Mbotela’s commentaries of Harambee Stars games. He was always the one with the ball during matches as Kenyans from all over the country listened to the proceedings of the game on radio as it was commented by Mambo Mbotela.

Joe’s son, who also played in the Kenyan Premier League, Oscar Kadenge said that Joe’s condition was not so well before the stroke.

“The doctors say it is a stroke and he has not been able to talk for the past two days and we are really praying for his quick recovery,” said Oscar. 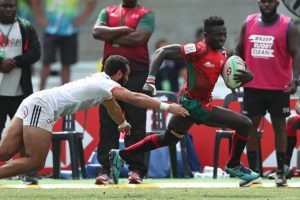