Veteran radio presenter Fareed Khimani on Monday morning made a return to Capital FM after being hired to co-host the Capital in the Morning show alongside Amina Abdi.

“That feeling of first day at work and in your CV you said you work well under pressure…. Removing the pressure literally,” he announced on his Twitter page.

The return of Khimani, who worked for Capital FM, XFM and Nation FM in the early 2000s, was, however, marked by mixed reactions. While his ardent fans went into celebration, others were of the opinion there was need to give young presenters a chance to shine.

That feeling of first day at work and in your CV you said you work well under pressure…. Removing the pressure literally ? @984inthemorning #Breakfast984 pic.twitter.com/qwhYTcVqY4

About one year ago, Khimani announced his return as a morning show presenter at Nation FM.

His return comes as the Chris Kirubi-owned media house undergoes a major restructuring that has seen several veteran staffers leave in recent weeks.

On Friday, former presenter Joey Muthengi also rejoined Capital FM to co-host ‘The Jam 984’ show alongside Martin Kariuki, which was formerly hosted by Cess Mutungi, who is among those who have left the station.

Being back home is causing you to post smizing and leaning on the wall pictures? What’s next Fa?#doingitforthegram #doingitfortwitter pic.twitter.com/gC386fvYs6

When radio was RADIO… 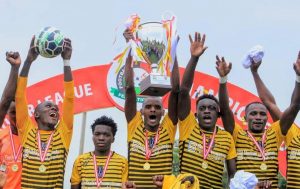