A Family Bank branch. The bank has reported a 288% increase in profit to Ksh949 million.

Family Bank has reported a Ksh949 million profit for the full year ended December 2019, a 288% increase on the Ksh244.2 million it reported the previous year.

Customer deposits adjusted up to Ksh1.6 billion from Ksh1.5 billion the previous year while deposits and placements with non-banking institutions set back the lender Ksh11.8 million.

The tier II lender is also having to contend with the bad loans problem facing all banks in the country with Family Bank reporting growth in Non Performing Loans (NPLs) from Ksh8.13 billion to Ksh8.24 billion during the period under review.

Family Bank also raked in Ksh390.7 million from forex trading in 2019 up from 337.4 million the previous year.

Conversely, the bank also lent out Ksh2.3 billion last year to insiders down from Ksh2.4 billion in 2018. The money was funneled to directors and shareholders as well as other associates despite Central Bank’s warnings that insider loans pose serious risks to the Kenyan banking sector.

Chief Executive Rebecca Mbithi attributes the company’s growth to a risk-taking mindset which she says is paying off.

“Innovations such as premiering the salary advance on the ATMs and leveraging on strategic partnerships such as with Water.org to provide water credit are also key contributors that we continue to incorporate in our business,” said Ms. Mbithi while releasing the results.

Mbithi was named Family Bank Managing Director & CEO in February 2019 replacing David Thuku who resigned in September 2018 after being accused of presiding over the battering of the bank’s reputation after it emerged that various transactions in the infamous National Youth Service (NYS) I scandal were done through Family Bank.

Under her watch, the lender has slowly recovered from the reputation risk and posted healthy revenues.

Before being tapped for the CEO position, she was the lender’s company secretary and director, legal services. 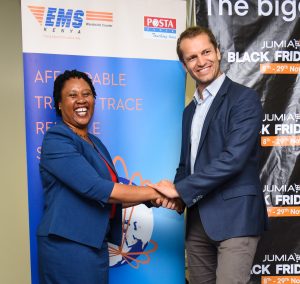 Posta, Jumia Partner to Make Essential Goods Affordable Countrywide
When shopping on Jumia, customers will have the option to…