This Facebook page with the name Hon David Murathe does not belong to Jubilee vice-chairman David Murathe, nor is it run by the politician.

The page, which has over 30,000 followers, has been making posts allegedly originating from the politician, which Business Today has found to be false.

On Monday, August 22, 2022, the page made a post alleging that the Supreme Court would nullify the presidential results announced by the Independent Electoral and Boundaries Commission (IEBC). In the results, Deputy President William Ruto received 50.49% of the vote, a total of 7,176,141 votes, defeating Azimio la Umoja Candidate Raila Amolo Odinga – a former Prime Minister and veteran opposition leader. Odinga received 6,942,930 votes representing 48.5% of the vote.

“The Supreme Court of Kenya will nullify the IEBC results that were announced by IEBC Chairman Wafula Chebukati. Kenyans should follow the SCOK proceedings keenly and prepare for a rerun,” the page posted.

The information was posted hours before the Azimio coalition filed a case at the Supreme Court protesting the results.

On August 20, 2022, the page shared unverified news that IEBC Chairman Wafula Chebukati had fled the country and was in Birmingham, UK.

“14 ICT staff from IEBC arrèsted by ATPU and Ballot boxes sent to kahawa garrison. One of the ICT staff had already bought a house cash and a porsche cayenne. Chebukati is already in Birmingham, UK as I write. He flee Kenya yesterday (sic),” the post reads.

Closer scrutiny of the page shows that it was created on July 23, 2021, using the name Hon Maina Kamanda, a former MP who was nominated to the 12th Parliament by the Jubilee Party. The page changed its name to Hon David Murathe on August 8, 2021, an indication of impersonation on social media. 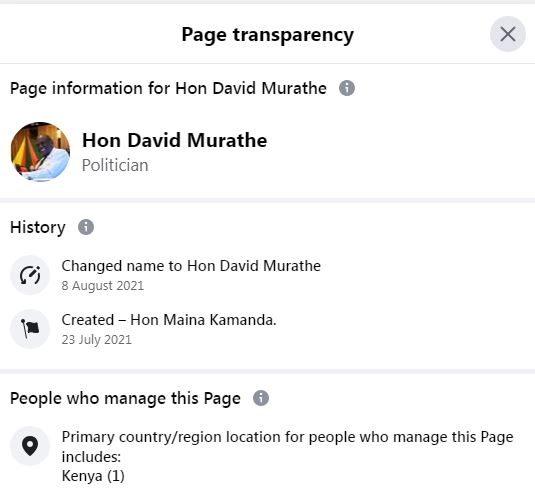 “I’m not on social media,” Mr Murathe said.The Facebook page bearing the name Hon David Murathe is therefore fake and is not run or affiliated with the politician.

Read: False: This Image Does Not Show Presidential Outriders At Rigathi Gachagua’s Home