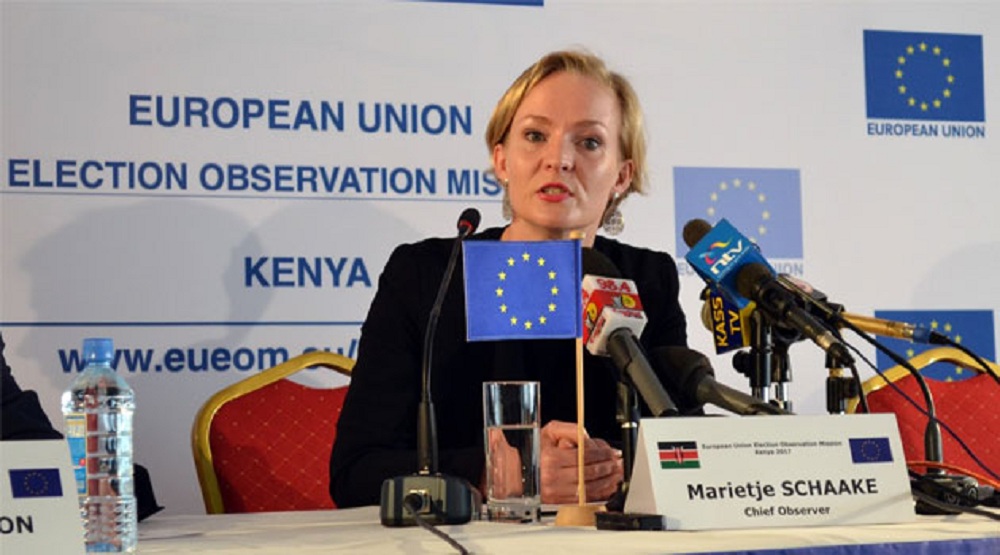 The European Union Elections Observer Mission, which monitored last year’s elections in Kenya, has accused the government of blocking their travel to Nairobi to present the final report.

Chief Observer, Ms Marietje Schaake, Member of the European Parliament from the Netherlands, who released the report in Brussels, says the team had previously agreed with the Kenyan authorities that they publish their final report within three months of the October 26 fresh election.

“The report was released in Brussels after the Kenyan government stated it was not prepared to receive the Chief Observer in Nairobi at this time. Besides presenting a final report to the Government, EU EOMs normally organise discussions with political parties, civil society representatives, journalists and other stakeholders,” she said in a statement.

Schaake said all EU EOM observers are bound by a code of conduct, which requires strict neutrality and non-interference and the mission undertakes its work in accordance with the Declaration of Principles for International Election Observation.

The Chief Observer noted: “The EU EOM came to Kenya after being invited by Kenyan authorities. We have looked at how electoral rights under Kenyan law and Kenya’s commitments under international law have been upheld. We look at how this election has ultimately served the Kenyan people. Our report and accompanying recommendations are the result of comprehensive observation of the electoral process,
beginning in mid-June 2017.”

“Kenyans went from high hopes for these elections to many disappointments and confrontations. Kenya
remains deeply divided. Our final report and recommendations are intended to contribute to a better democratic process and a restoration of trust. But with every recommendation, leadership from those in power, support from the population, and cooperation between different fractions are needed in order to initiate reforms.”

Ms Schaake noted an improved performance by the Independent Electoral and Boundaries Commission
(IEBC), with a more transparent results process in October, but also a persistent lack of trust in the institution by the opposition and other stakeholders. Other key concerns are intimidation by politicians from both sides of independent institutions, such as the IEBC and the judiciary, some violence by opposition protesters and the use of disproportionate force by security forces, attempts at restricting civil society and media, and abuse of state resources by both sides but mostly to the benefit of the national incumbent.

Ms Schaake added: “We hope the recommendations in our final report will contribute to more resilient
democracy from which all Kenyans benefit. This takes time to build up, which is why it is important that steps are taken promptly to improve the legal framework, institutions and practices.”

The EOM’s 29 recommendations for reform include improving resilience of independent institutions, inclusive legal reform, improved ICT arrangements and IEBC oversight, a legal requirement for a comprehensive results framework, and a review of the electoral system to promote the participation of women and inclusivity.