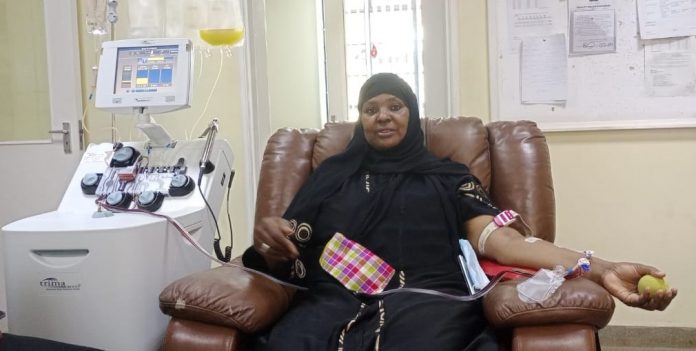 Ms Aisha Mukami Dafalla, Kenyan b***d ambassador, has embarked on a campaign to mobilize the public on the need to make regular b***d donations to save lives. Dafalla, the 58-years-old, from Kibera, Nairobi, started donating b***d at an early age of 17.

She has so far donated b***d 69 times driven by a passion to save life regardless of relationship, distance, race and religion. Dafalla says donating b***d motivates every moment of her life.

Ms Dafalla is spearheading a programme to mobilize at least 100,000 Kenyans to be regular b***d donors for the country to attain a sustainable supply of safe and adequate b***d in hospitals. She will be working with the Ministries of Tourism and Devolution as well as corporates in this drive.

The b***d ambassador says b***d donation is a key step in saving lives, noting that many lives are lost every day in hospitals through lack of the precious commodity. She founded B***d Donor Champion Network in 2021 to spearhead the campaign.

According to Kenya National B***d Transfusion Service, seven people in the country require b***d every 10 minutes. One pint of b***d can save up to three or four people while three tea spoonful of b***d can save a newborn’s life.

Anyone aged between 16 and 65 years and weighing at least 50kgs is eligible to donate b***d. “Make an effort of donating even if it is twice or once a year, to save someone’s life today because tomorrow is not guaranteed,” Ms Dafalla says.

She first donated b***d while in high school, though she confesses she didn’t know the importance of the exercise: she did in exchange for food (bread and soda)!

“I was in form three,” she recalls. “St Johns Ambulance had visited our school for b***d donation and they were giving out bread and soda and I think it is the snack that motivated me before I developed a passion for saving others. My parents were against it, because they did not know how important it was so I had to put a break to the exercise for five years until I moved out of my parents’ house.”

Ms Dafalla has scooped many awards for her selfless contribution. The Cabinet Secretary Ministry of Health appointed her as the Kenyan b***d ambassador for January 2021 to December 2022. During Mashujaa Day celebrations in 2020, she was recognized as a heroine, being the highest female b***d donor.

She has also been awarded a certificate of recognition by the Ministry of Sports, Culture and Heritage for her work of saving and changing lives.

In 2019, Ms Dafalla toured Rwanda on World B***d Donor Day, held yearly on 14th June, and was surprised to see b***d on shelves waiting for patients unlike in Kenya where patients often wait for b***d.

“I had a target of donating 70 times and I believe I’m going to hit my target, and I can still continue donating like twice a year since I’m not yet over the age limit,’’ she says.

[ By Jacob Rotich and Ondere Veronica ]