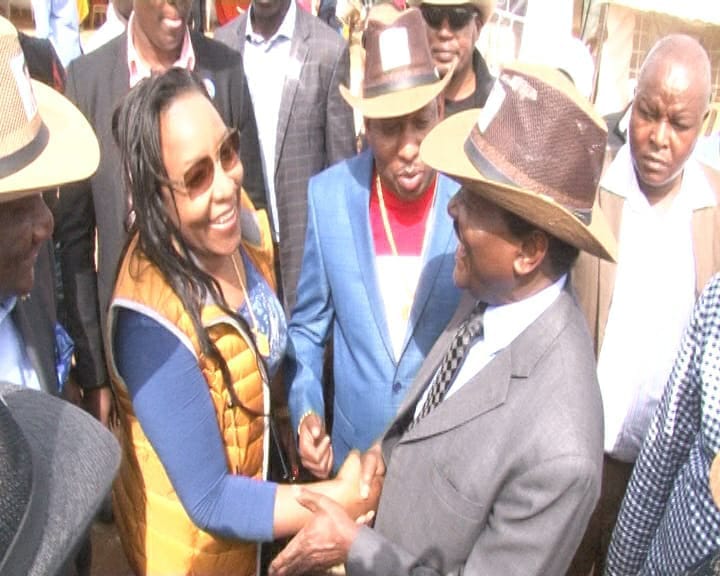 Nairobi Deputy Governor nominee Agnes Kagure Kariuki has a light moment with Wiper leader Kalonzo Musyoka as Nairobi Governor Mike Sonko looks on. Her presence at the event is seen as a major score against her rivals.

Even in politics, it seems, extra ordinary times call for extra-ordinary actions. That appeared to be the situation on Sunday when Nairobi Governor Mike Sonko openly supported Kalonzo Musyoka for the presidency in 2022.

While the venue for the declaration – Sonko’s rural home in Mua, Machakos – wasn’t surprising, the twist in his support for Kalonzo Musyoka has sent tongues wagging in Jubilee and Ukambani politics, given that Sonko was elected on Jubilee ticket under which Deputy President William Ruto has declared his interest in the highest office.

Meanwhile, curiously present among the leaders at the anniversary was Agnes Kagure Kariuki, the veteran business executive who has been nominated for the position of deputy governor for Nairobi County Government.

It not clear whether her presence at the event was a coincidence but political observers are interpreting it as a strong signal from Sonko, who has been leading without a deputy since January when Polycarp Igathe quit in a huff.

Ms Kagure has been nominated alongside three other who include former Starehe MP Margaret Wanjiru and lawyers Karen Nyamu and Jane Weru. It is expected that one of these women will take over the deputy governor position.

It is telling that the other three candidates for the post did not attend the function, which was

Ms Kagure, a renowned insurance executive, business woman, and a gender activist, knows too well that her presence was pregnant with meaning. She is seen mingling with the Ukambani political elite including Sonko and Musyoka.

Ms Kagure is the founder and Managing Principal of the Insurance Consulting Group (ICG), an independent insurance agency in Kenya.

Before founding ICG, she was the Executive Financial Advisor at CfC Stanbic. In 2011, she was named in the Top 40 Women Under 40, an annual list of women who have risen to occupy positions of influence in Kenya before the age of 40.

READ: SHARON EFFECT: WHO’S BUYING OFF ALL NEWSPAPERS IN MIGORI?

Ms Kagure is still basking her new position as the patron of the Kenya University Students’ Organisation (KUSO), following elections held on July 8 in Nairobi. She recently added a feather to her cap by receiving the prestigious award of peace ambassador by the King of Thailand this year.

With such strong credentials, she is seen as a front-runner in the race for Nairobi City County Deputy Governor, a key position that calls for executive skills than political experience.