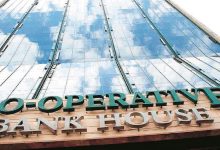 The Co-operative Bank of Kenya on Thursday posted a Ksh7.2 billion net profit for the first six months ended June 2020, representing a 3.6% drop from the Ksh7.5 billion it posted the previous year on bad loans provisioning.

Bad loan provisions increased from Ksh14.9 billion to Ksh 15.6 billion during the period under review which killed off any possibility of the lender improving on its performance from last year.

The bank’s balance sheet adjusted up from Ksh429.6 billion to Ksh513.9 billion during the period under review.

Interest income grew marginally from Ksh20.4 billion to Ksh21.8 billion aided by investment in government securities which grew by 29 percent to Ksh 122.4 billion.

Earnings Per Share (EPS) declined from Ksh1.27 to Ksh1.23 during the period under review.

So far, Co-op Bank has restructured loans amounting to Ksh 39.2 billion since the country reported its first coronavirus infection case in mid-March.

The lender says that it is still actively considering customer applications on a case-by-case basis.