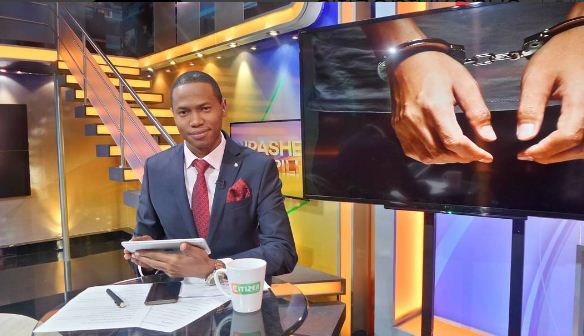 Emerging TV anchor Salim Swaleh has left Citizen TV in a low-profile exit that has the media industry guessing.

Salim, who anchors on Citizen Nipashe evening news programme, is said to have resigned last week without indicating where he is headed. Sources say he could end up at NTV, which is scouting for Kiswahili anchor after the exit of Jamila Mohamed to Citizen TV or K24, which is headed by his friend and former boss at Royal Media Services (RMS), Peter Opondo.

Information reaching Business Today media desk point to a deal gone sour for Salim, which incidentally conflicted with his job as a journalist. Salim may have found himself a victim of the war pitying Nairobi Governor Mike Sonko and interior Permanent Secretary Karanja Kibicho.

The two have been at loggerheads, with Sonko accusing the PS of undermining him and scheming to overthrow him from the helm of Nairobi City County Government.

According to sources Salim was allegedly used by Sonko to fix Mr Kibicho by recording the PS saying negative things about the embattled governor and sharing the audio with Sonko.

After recording the PS at his office at the Office of the President on Harambee House, Salim reportedly delivered the tape to Sonko at City Hall. In the tape, Kibicho called Sonko all sorts of names.

Almost immediately, Sonko called a press conference and Kibicho got wind of what had happened and immediately contacted Purity Gathoni, Royal Media Service founder S.K. Macharia’s wife, to report the incident, touching off events that led to the anchor’s exit. As vice-chair of RMS, Mrs Macharia oversees the day-today-running of Kenya’s biggest broadcasting house and plays an instrumental role in hiring and firing.

It is not clear whether he was paid for this “assignment”.

Salim Swaleh joined Citizen TV in June 2016 and started off with presenting Kiswahili news on Sunday, taking over the Sunday show from Lulu Hassan and Kanze Dena.

Prior to joining Citizen Television, Salim was an editor at Islamic Republic of Iran Broadcasting (IRIB) based in Iranian capital, Tehran, for eight years. Salim was also a radio presenter and a special analyst on African news on the IRIB’s affiliate, Press Television.

Battle of the egos

Sonko and Kibicho have clashed on a number of issues, the most notable being President Uhuru’s succession. Sonko in April accused Kibicho of leading a plot to block Ruto from succeeding Uhuru in 2022, but Kibicho dismissed the allegations and advised the governor “to concentrate on cleaning up Nairobi”.

“Tell Sonko to man up and address the people he wants to address but not through me. He should address that person directly because that’s what men do. I am not a politician and neither would I be politicking around the DP,” Kibicho said angrily.

The bad blood between the two led to the recent reduction of Sonko’s security, which the governor took to claim someone was after his life. An audio recording emerged in which a voice believed to be Kibicho’s is heard talking strongly about Sonko. In the audio recording, the speaker says he can eliminate Sonko within a day if he wants.

“I’m a government officer and that’s what we are mandated to do. Let him joke, he won’t finish even a day he is just a minor,” he says.