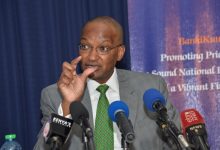 Central Bank of Kenya Governor Dr. Patrick Njoroge. He has dismissed the idea that local government borrowing crowds out lending to the private sector.

Most Kenyan CEOs operate in a very rosy environment which means they remain untested in tough times and would run away if they encountered an overwhelming challenge, well at least according to Central Bank of Kenya (CBK) Governor Dr Patrick Njoroge.

In an interview with audit and financial services firm, KPMG in its Agile or Irrelevant 2019 CEO Outlook, Dr. Njoroge opines that Kenya needs a new crop of agile CEOs who will be more of problem solvers and less of suits if the country is to realise its economic development goals.

“I would characterize the environment in which our CEO’s operate as an ocean that is as flat as a pancake. Many do not know how to act with agility. They are shepherds who will run away when the wolves come,”

“In my view, there is too much slack (or fat) and our CEOs are still complaining, “

According to the monetary policy regulator, most CEOs in East Africa are also not ambitious enough to transform their leadership styles with the sole aim of building resilience.

“Functional leaders must be very good leaders. To build resilience the bar must be much higher – most CEOs are not holding themselves to the same bar,” says Dr Njoroge.

Asked to comment on the latest trend in Corporate East Africa where CEOs manage a company for five years and then move on to the next project, Dr Njoroge says that a good leader always works with the long term desired results in mind.

Dr Njoroge further avers that disrupting and taking a business to new heights depends on the vision of the CEO.

“Innovation is about providing relevant solutions. The key issue is what are you doing for the customer?,” says Dr Njoroge ” The CEO is the carrier of fire – he or she carries the vision of the organization forward, and communicates it to the team,”

The former International Monetary Fund (IMF) advisor further argues that a CEO needs not to be the innovator but must be the person that ensures that innovation succeeds.

Njoroge also thinks that a chief executive also has a social responsibility and must always operate in the best interests of the society no matter the amount of danger the business that they lead finds itself in.

“For example, during the violence in a number of flash spots in Nairobi during the 2017 election in Kenya, the banks kept their branches in these flash spots open. If this had not happened, it would have sent the wrong signal that the country was not open for business due to election violence,” said Dr Njoroge.

He also thinks that CEOs should afford their staff the room to innovate freely without fear that failure would render them incompetent.

“Most CEOs think of innovation in the domain of technology, but people are more important. I really do hope that the greatest innovation will come from the professional services sector –they deal with people,” he says

“Yes technology drives innovation, but technology needs to be considered based on the problems to be solved,” adds the governor.