Former Safaricom CEO Bob Collymore passed on Monday 1st July 2019 at his home in Nairobi. He was battling with cancer. Photo/Courtesy

Born in 1958, Robert William Collymore is Guyanan british who was based in Kenya at the time of his passing. Safaricom being the biggest company in Kenya made Collymore a very influential man in Kenya and as he led a company seen as a national institution.

Bob moved to join his mother in the United Kingdom at the age of 16, where he attended Selhurst High School. He was offered a place at Warwick University but had to turn this down as he was ineligible for funding.

Prior to his moving to UK to live with his mother, Bob had stayed with his grandparents with in Guyana. Unable to pursue a degree, Bob Collymore spent his time filling forms as a junior underwriter and working as a train announcer while pursuing his passion for art.

[Read: Bob Collymore to be laid to rest on Tuesday in a private ceremony]

He was selling oil paintings along the railings of Hyde Park and would have done that for a long time, probably till now, were it not for his mother. His mother jokingly threatened to evict him from home unless he got a serious job and got him an interview at British Telecom, where she worked. He was given an entry-level job as a clerical officer.

Bob Collymore career took off when he joined the UK’s Cellnet in 1993, just as the corporate world was starting to venture into mobile telephony. As he termed it, he was walking down a path no one had walked before.

In July 1994, he was promoted to Handset Strategy Manager at Cellnet, a position he held for a year before moving to Dixons Group PLC where he assumed the position for Purchasing Director.

It was after this role that Bob joined Safaricom as the CEO in November 2010. He has held the position until his unfortunate death on 1st July 2019. Bob has more than 30 years of commercial experience working in senior executive roles in the telecommunications sector.

Collymore also served on the Board of Acumen, the United Nations Global Compact Board and is a member of the B TEAM, a not-for-profit initiative formed by a global group of business leaders to catalyze a better way of doing business, for the well-being of people and the planet.

He also served on the Kenya Vision 2030 board, is a Founder Trustee in the National Road Safety Trust and Chairman of the TEAMS Board.

In 2012, he was conferred the state honour of Moran of the Burning Spear which was awarded to him by retired Mwai President Kibaki.

The deceased was diagnosed with Myeloid Leukemia in 2017 and had to travel to the United Kingdom for treatment until July Of 2018. He succumbed to cancer this morning, July 1st 2019 while still serving as CEO at the telecommunications company. His contract was recently extended to next year after rumours went round that he was stepping down due to health reasons.

He leaves behind his wife, Wambui Kamiru and four children. Kamiru was his second wife and Bob had two step daughters from Kamiru’s first marriage. Kamiru was also not Bob’s first wife. He has been married thrice, divorcing twice. 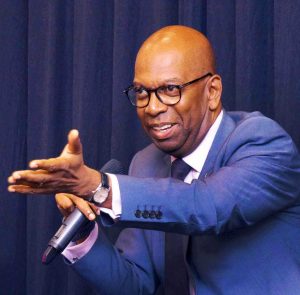