ICT Cabinet Secretary Joe Mucheru, one of the proponents of Kenyan CEO for Safaricom, now says the board will be let to decided. Photo / Business Today

The government appears to be softening its stance on the management succession at Safaricom, with ICT cabinet Secretary Joe Mucheru hinting that the task would be left entirely to the company’s board of directors.

Mr Mucheru said that even though the government is a major shareholder, with 40% stake, in the leading mobile services operator, it cannot dictate who should be appointed since there is a board that is tasked with that responsibility.

“Their job is to ensure that they continue providing value to Kenyans and giving good returns to their investors and the government cannot interfere with their operations,” said Mr Mucheru, speaking today at the inauguration of the new board of the Communication Authority of Kenya.

The position of Safaricom CEO was left vacant after the sudden death of Bob Collymore on July 1st 2019. Former Safaricom CEO Michael Joseph has been appointed in acting capacity, as debate rages on who should take over.

Mr Mucheru had previously been quoted fronting for a Kenyan to take over the management. Being the most profitable company in Kenya with products touching the lives of virtually all Kenyans, the succession is being keenly followed by many.

Vodafone, which holds 35% through Vodacom, has always had the bigger say in management, picking both Michael Joseph and his successor Bob Collymore.  With the government keeping off, Vodafone will likely play a bigger role in selecting the new CEO, even if the person will be Kenyan.

He said Kenya must support innovation and ensure the right regulations are in place, adding that failing to do so could cost the country its innovative edge.

There have been queries about Safaricom’s dominance in the market with some proposing that the company be split and have M-Pesa as a separate company, but Mr Mucheru said the government cannot force the company to do that.

“If they want they can decide to split but they cannot be forced because of the huge investments operators put in to be innovative to get profits since voice revenue is going down,” said Mucheru. “If we force them to split, investors will shy away from the country since they will be punished for innovation,” he insisted.

CAK chairman Ngene Gituku said the board will swing into action to clear pending assignments. “Regulators don’t have many friends, we have enemies and friends as well but we must work to fulfill our mandate,” said Gituku adding that the CS has been firm on the issue of a new board and has been following up on the same.

[ NEXT: It’s back to the past as government freezes funding got development projects ] 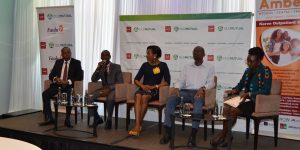