On Wednesday, the Members of the National Assembly were disunited over the industrial action as a section of them accused KQ and Kenya Airports Authority (KAA) of poor management causing millions of losses, while others called for dismissal of the striking Kenya Airport Workers Union (KAWU) members.

The boycott that caught the country’s transport management by surprise resulted to grounding of many inbound and outbound flights leaving thousands of passengers stranded at various airport terminals nation wide.

However, through the deployment of the Kenya Air Force personnels and those from National Youth service (NYS) the main aerodome had returned to normalcy in the late evening.

“Despite the disruption, 93 percent of our booked passenger loads have since departed or are scheduled to depart later in the day. All evening flights are fully crewed and will depart as scheduled,” read the statement from Kenya Airways.

The boycott, which has been termed illegal by a section of Members of Parliament and the Cabinet Secretary of Transport James Macharia, after the Employment and Labour Court suspended the action.

During the strike, the security agencies arrested KAWU Secretary General Moss Ndiema as the striking workers were dispersed from JKIA.

He further challenged KQ and KAA to present him with the merger documents which is the core source of the strike.

“The merger between KQ and KAA must be made open. I asked for the merger documents, unto now I have not received it. If you want a merger it should be inclusive, everyone should be on board,” said Mr Atwoli at JKL Live show.

The merger dubbed as ‘Project Simba’ proposes amalgamation of KQ and KAA to manage operations at JKIA. The proposal has not only been rejected by the aviation workers but also the National Assembly citing that a lot is at stake.

See also: KQ flies at the NSE despite strike at JKIA

“This workers have put in so many years in their work at the airport, they have every right to know this type of merger and how it will affect their jobs,” added Mr Atwoli.

The striking aviation workers have demanded removal of KAA boss Johny Andersen together with his board chair and KQ counterpart Sebastian Mikosz  who has been accused of mismanagement and a fat pay check. 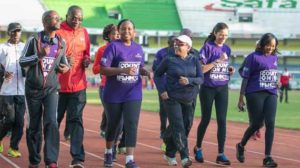