President Uhuru Kenyatta addressing the nation from State House previously. The president promise to facilitate all national teams has been broken days after awarding marathon champion Eliud Kipchoge with an Elder of the Golden Heart, the highest civilian award in the country for his INEOS 1:59:40 exploits in Austria {Photo: The Nation}

Concerns by Kenyans on just how the government will manage the ever growing public debt are set to be ignited by revelations that the country’s public debt will hit the Ksh7 trillion mark by the time President Uhuru Kenyatta leaves office in 2022.

The National Treasury in its draft Budget Review and Outlook Paper projects that Ksh2 trillion will be added to the public debt by the time President Kenyatta completes his second term in office. Currently the public debt stands at Ksh 5.1 trillion.

The former Finance Minister inherited a debt of Ksh 1.8 trillion when he took over from former President Mwai Kibaki in 2013. This means that President Kenyatta will have presided over a debt increase of almost 300% during his ten-year tenure.

By 2022, the Jubilee administration will have presided over a borrowing spree of more than Ksh5.3 trillion.

Before signing the Finance Bill 2018 that was forcefully passed by the National Assembly on September 20, President Kenyatta and Deputy President William Ruto had put on brave faces amid pressing questions from the public and analysts on the ballooning public debt.

The president and his deputy maintained that the government was in control of what was being perceived as over borrowing at exorbitant rates before changing tune by saying that more taxes needed to be collected if the country was to realise its development agenda.

In the current financial year more than 600 billion will go towards repayment of loans and short term debts.

“Borrowing is not bad if it is to spur economic growth. The money we have borrowed will not be used for recurrent expenditure and I can assure you there is no need to be worried,” said President Kenyatta in March 2017 during an interview on Citizen TV.

DP Ruto sang a similar tune. After the government issued Eurobond II at the London Stock Exchange in February, he said, “I want to assure Kenyans that before borrowing, the government made projections on what we need to spend on and our ability to pay that loan. I can reassure Kenyans that we want to initiate development projects that will spur economic growth in the country and the debt is within manageable levels.” said DP Ruto .

Uhuru on September 14 fell short of saying that the country was in an economic crisis by announcing austerity measures to rein in on non-essential spending.

“But we still face a financing gap. This measure will not suffice to balance our budget, as required by law. Therefore I have also proposed wide-ranging cuts in spending as well as austerity measures across all arms of government. The cuts target less essential spending, such as hospitality, foreign and domestic travel, training and seminars, and similar categories,” said the president. 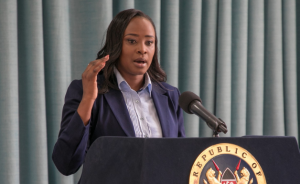