President Uhuru Kenyatta has placed the National Transport and Safety Authority (NTSA) and other major transport functions under the Interior ministry, which is headed by Dr Fred Matiang’i.

This came as the President also named Matiang’i to chair a Cabinet Committee that would supervise and oversight all government programmes and projects across the country.

The move, which is Executive Order No. 2 of 2019 on Management and Coordination of National Government Transport and Safety, leaves his Transport counterpart James Macharia to largely preside over policy formulation as well as mechanical and transport services.

Macharia has previously been accused of failing to deliver on his mandate, including taming road accidents.

Late last year, Matiang’i, who has previously been described as a super minister going by his performance in various dockets, had to step in to launch a road safety campaign that minimised accidents during the festive season. It led some to conclude he had taken over Macharia’s mandate.

Following his new roles in the reorganised government structure, some have described him as a defacto Prime Minister.

“Under New Government structure, as per Executive Order 1 of 2019, Dr Fred Matiang’i is the Defacto PM. Interesting Times,” Gordon Opiyo wrote on Facebook.

“SUPER CS Dr Fred Matiangi is technically the Prime Minister. His PS Dr. Karanja Kibicho is technically the Super PS. That is as per the new Framework for Coordination and Implementation of National Government Development Programmes and Projects. Matiangi will chair the National Devt Implementation and Communication Cabinet Committee while Kibicho will chair the Technical Committee of the same. That is the first Executive Order of President Uhuru this year, Order No. 1 of 2019. #WorkingTeam,” journalist Wahome Thuku also commented.

Here are the functions stipulated in the executive order for the two ministries: 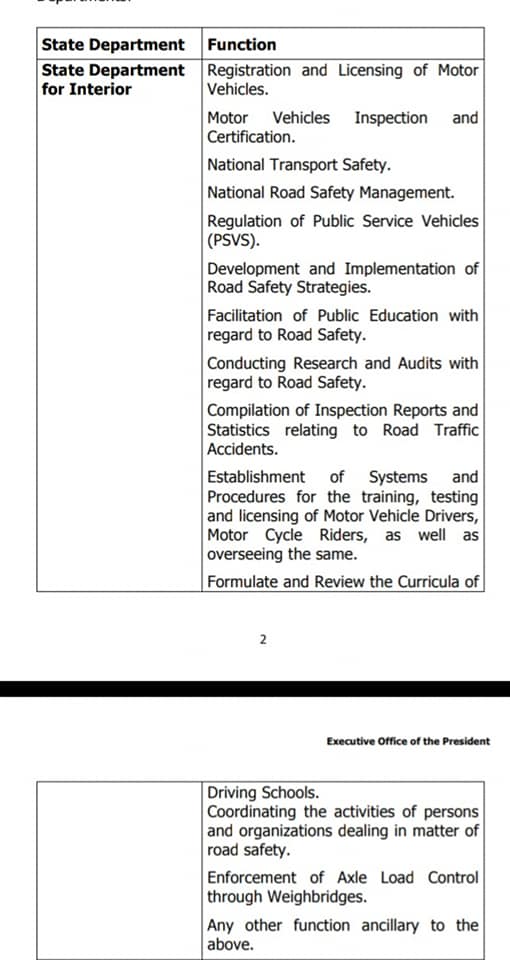