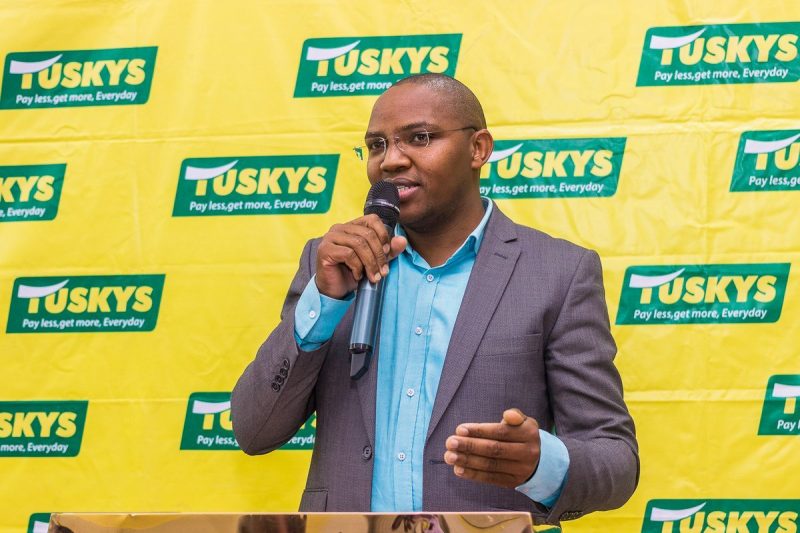 Tuskys CEO Dan Githua during a past event. The retailer has been barred from paying directors or expanding without regulator approval.

Retail chain Tuskys will now need to consult the Competition Authority of Kenya (CAK) before paying its directors or opening more outlets in the country as the regulator moves to protect the interests of the supermarket brand’s suppliers who are owed Ksh1.2 billion by the company.

CAK recently moved in to make sure that Tuskys honours its obligations to suppliers who had called for intervention from the state stating they were yet to be paid despite the retailer underreporting the amounts it owed suppliers in its communication to the regulator.

Supermarket chains rely on small profit margins and economies of scale to make their money hence the constant need to keep expanding to raise profits. Most of the expansions undertaken by Supermarkets are normally debt-fuelled making the retail business a high-risk venture. This option is now off the table for Tuskys.

Tuskys has also been stopped from declaring or paying bonuses, fees or other compensation to its directors who are mostly relatives in the family-owned retail chain.

“Tusker Mattresses Limited from the date of this order must obtain written concurrence of the authority as a pre-condition for expansion,” CAK wrote to the company. “The Authority imposes a prohibition from declaring or paying bonuses, fees and other discretionary compensation to directors.”

CAK in November 2018, set up a buyer power abuse department following the collapse of formerly huge retailers Nakumatt and Uchumi which prompted tightening of regulation in the cutthroat sector.

Going by the current trend, retailers will find it difficult to operate with reckless abandon as it was previously where they abused their power with the knowledge that they could exploit suppliers.

The position adopted by CAK is similar to regulation in the banking sector where deposits protection comes firsts and everything else after that. Tuskys has been ordered to clear all its arrears by July 16.

“The Authority has issued Prudential and Reporting Orders to one retailer (Tuskys) who, after several requests and extensions, failed to present a payment plan or evidence of negotiations with the affected suppliers,” Wang’ombe Kariuki, the CAK Director-General told the Business Daily.

“Out of the 25 retailers, only four retailers were found to have delayed payments exceeding 90 days. Three of the four retailers presented payment plans and have continuously reduced their debt portfolio.”

Failure to pay suppliers means the company will remain in the regulator’s cross hairs, limiting its expansion and management flexibility at a time when its rivals are eager to grow, having raised new debt and equity capital.

Tuskys becomes the first major retailer to be sanctioned by CAK’s Buyer Power Department following the collapse of Nakumatt which went under with Ksh18.5 billion still owed to suppliers.

Apart from imposing conditions on Tuskys operations, CAK has also launched a wide-ranging investigation into the retailer to establish the circumstances that led to the default.

The company, for instance, has been ordered to furnish the regulator with its monthly bank statements for the past one year for all bank accounts relating to its retail business by Friday.

The CAK started looking into Tuskys’ operations in April after reports emerged that it was not paying suppliers on time as provided for in their respective contracts.

Besides the Ksh884.3 million supplier debt confirmed by Tuskys, the regulator also discovered that the retailer owed an additional Ksh400.9 million through an independent investigation.

Besides bank accounts, the investigations into Tuskys’ affairs will include a review of its audited financial statements and those of its subsidiaries for the last three years.

The company has also been asked to provide the regulator with its management accounts for the last six months.

Social Protection and Employment For Persons With Disability

Your IP address 172.69.62.247 has been flagged for potential security violations. You can unlock your login by sending yourself a special link via email. Learn More