[dropcap]C[/dropcap]atered lunches/providing free lunch to employees in the office are likely to result in improved productivity, high employee retention and up to 150% Returns on Investment (ROI), according to a study conducted by American video conferencing company firm Highfive.

10 years ago companies like Google and Apple pioneered the idea of free lunch. However, according to Highfive, many companies, including small startups, have now added free food to their list of employee benefits.

HighFive spoke with top catering companies and did some back of the envelope math. Here’s what they found: 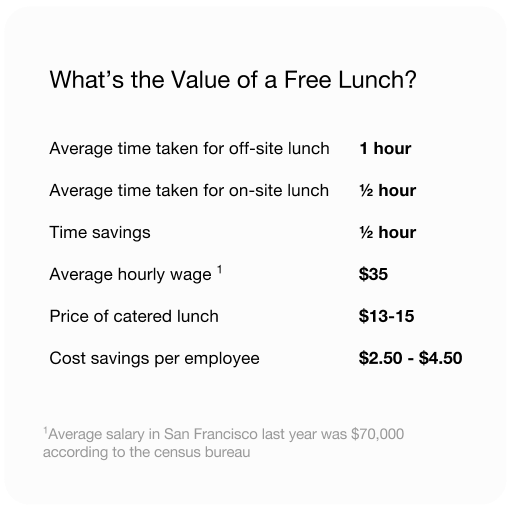 Offering catered lunches and providing lunch for employees shifts the financial burden to the company. But in return, as its calculations suggest, your employees can work for another half hour everyday. There’s more to it than that though, it says.

Employees who eat lunch together everyday are more productive. According to Highfive, Cubist Pharmaceuticals, a company with about 750 employees, recently put sensors on 30 of their employees to track the tone and frequency of their lunch conversations. That information was merged with email-traffic data and the results of weekly surveys in which employees rated their productivity and energy. When researchers parsed the data, they found that employees that engaged in conversations frequently were more productive and energetic.

Co-workers who share meals together also communicate more frequently which is a huge benefit for knowledge workers. Writing code can take 32% longer without proper communication, as workplace anthropologist Kevin Kuske notes in an interview with Entrepreneur magazine. As Kuske puts it, “In the world of a creative economy, work is better with trust. It’s better with social bonds. When you’re trying to build trust, creativity and relationships, you want to bring barriers down and get people to start acting more neutrally and food is just a way to do that.”

According to Highfive, research shows that physical space is also an important aspect of collaboration.

“In the late 1940s, psychologists Leon Festinger, Stanley Schachter, and sociologist Kurt Back researched how relationships were built. They concluded that physical space was the key to relationship formation. They wrote, “friendships are likely to develop on the basis of brief and passive contacts made going to and from home or walking about the neighborhood.” An office cafe is a great place to facilitate that physical contact amongst co-workers,” it notes.

“Steve Jobs incorporated these sociological findings into his famous redesign of Pixar’s campus. His team found a way to house all Pixar employees in the same office. They designed the space to encourage cross-department collaboration. But the most r*****l of all their changes was a lunch policy that was unheard of at the time: lunch would be provided for employees everyday and they would all eat in the same cafeteria. Today, Pixar is one of the most innovative companies in the world and recruits some of the world’s most creative talent,” the study says.

“While providing lunch for employees at your company can be costly, it is hard to deny that there are also many benefits. The numbers may not fit perfectly into your CFOs ROI model but if you add the intangibles of catered lunches the benefits may outweigh the costs,” Highfive concluded.