In a notice published in Friday's edition of the Standard newspaper, the media house said Willis Awandu, a correspondent, is no longer authorised to transact any business on its behalf. [Photo/Newsfirst]

The Standard Group has sacked a photojournalist after he received Ksh 1,500 from a charitable organisation allegedly to facilitate coverage of its activities.

In a notice published in Friday’s edition of the Standard newspaper, the media house said Willis Awandu, a correspondent, is no longer authorised to transact any business on its behalf.

Apparently, Awandu had received the money from one Eunice Njoki, who says she works for a non-profit organisation engaged in the education of children from poor backgrounds, to facilitate the coverage which included a pictorial segment.

However, in Whatsapp exchanges she published on a Facebook page, Buyer Beware, Awandu appears not to have met his part of the bargain and instead blocked her calls. It is then that she decided to write to her superiors.

However, speaking to Business Today, Awandu, who says he now runs Digital Concepts, a photography firm based in Nairobi, reads malice in the whole affair, claiming he had left the Standard by the time Njoki contacted him to assist in publicising an initiative to provide books to targeted school kids.

“I left the Standard after an investigative story I was involved in about a Chinese woman engaged in shady business in Adams Arcade, which even saw us arrested and put in custody, was questioned by the editors. When Njoki contacted me, I clearly told her I was no longer there but would try to help out because I still know people there. That is when she said it had been a long time since we touched base and offered to buy lunch,” he said.

“I see this as a witch hunt because all the guys we went with for the investigative story are still at work, including the driver yet I was accused of taking a company car without authorisation,” Awandu added.

According to Awandu, he was attending a funeral when she called him later to complain the story and photos had not run and he assured her they will do in due course but she went ahead to complain to the Standard management that he had conned her.

I refunded her double the amount

“I had no access to my account at the time. I told her it would appear in due course but in fact, I ended up refunding her the Ksh 1,500 and a friend of mine I had contacted earlier also sent Ksh 1,500. So in essence, she got back double the amount she had sent me for lunch. What I hear is that they were trying to cover up for embezzlement of funds earmarked for the book donations,” said Awandu.

The issue has, however, once again brought to the fore the cancer of bribery that permeates the media sector, partly because of poor remuneration in the lower cadres, especially among correspondents.

“Poor remuneration results to this…Issues of Remuneration and welfare of scribes more so correspondents should be adequately addressed,” said Kisumu-based journalist Dickson Odhiambo.

There are, however, claims that Awandu found himself afoul of law enforcement at least on two occasions after trying to extort foreign nationals engaged in business in the country, the latest being the Adams Arcade incident. The other took place in Industrial Area. 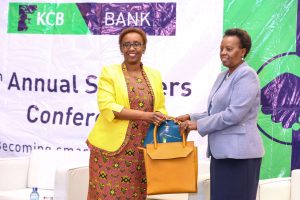