Many of Kenya's richest are not known to be very generous to the poor and charitable causes.

On Tuesday 24th March 2020, Kenya received 100,000 face masks, 20,000 Coronavirus test kits and protective suits from Chinese tycoon Jack Ma as part of a donation of personal protective equipment to help in the fight against the global pandemic.

Ma made the donation of medical equipment to all the African countries to assist in the fight against COVID-19, which continues to ravage many nations.

Jack Ma, or Ma Yun, needs introduction only to very few people. He is a Chinese business magnate, investor and politician. He rose to the top in the business world as co-founder and former executive chairman of Alibaba Group, a multinational technology conglomerate.

We would like to believe that Jack Ma, who visited Kenya in 2017, donated the stuff after being touched by the plight of Africans whose economies have been managed in such a way that few individuals control most of the money, leaving many at the mercies of helplessly corrupt governments.

“We cannot ignore the potential risk to Africa and assume this continent of 1.3 billion people will blissfully escape the crisis,” Mr Ma said after Kenya reported its first cases of Covid-19 infection. “We can take precautions now and get prepared ahead of time, as Africa can benefit from the experience and lessons from other countries that were earlier hit hard by the virus.”

Well, cross over to Africa, and Kenya to be specific. Almost two weeks later, the silence from its most successful sons and daughters or families is as deafening as what we imagine a Covid-19 isolation room could be.

Kenya is blessed with men and women of means, who often grace the lists of the super-rich, even on the African continent. We thank God for the richest Kenyans.

When it comes to giving back to society, however, the list of Kenyan billionaires, is almost always short.

Giving, or helping a cause, is voluntary. It comes from the heart. But you just can’t help wondering why Kenya, and even Africa at large, has a short supply of philanthropists from its richest lot.

Yet it’s through the philanthropy of other people that some children from poor households get educated. It is through the giving of others that some get medicare. It is, indeed through philanthropists, that the world is such a better place.

Microsoft Bill Gates runs philanthropic projects in health through Bill and Melinda Gates Foundation. Former US Presidents Bill Clinton and Jimmy Carter, run charity projects across the world touching on various issues, which have transformed lives for the poor. The list can go on and on.

In a report by Knight Frank released in March 2020, Kenya has 42 ultra-high net worth individuals, worth over $30 million each which is equivalent to Ksh3.07 billion. Utra-high net worth is financial lingo for the super-rich. If we were to include the rich, the list would run into thousands.

Some of Kenya’s super-rich run successful businesses that fund charity projects. That’s commendable. But at the individual level they shy away from helping their brothers and sisters who very much need a boost here or there. Richest Kenyans who are notable philanthropists locally include Manu Chandaria, Nairobi Governor Mike Sonko

Whatever contribution each Kenyan makes, big or small, will go a long way.

Take the Coronavirus pandemic, for instance. Aside from corporates doing this and that, less for charity than branding recognition, we are not seeing Kenyans abundantly blessed with wealth and material coming through. Many Kenyans under self-quarantine can’t afford sanitizers; for some, buying soap is a big deal. With partial lockdown and curfew coming in effect, many will struggle to find something to eat.

In short, we are in a situation where philanthropic souls play major roles, and when we need many, many of them. The government is doing its part and President Uhuru Kenyatta has led his top executives in taking pay cuts. MPs have followed suit. Whatever contribution each Kenyan makes, big or small, will go a long way.

As Coronavirus situation continues to defy interventions, we feature some of the rich Kenyans, who are actually billionaires, and whom we are looking up to for some action during the Covid-19 lockdown and other causes. If each of the individuals we list below and hundreds of others not on the list supported different causes in Kenya, our country would easily attain middle-income status.

Zedekiah Kirop Bundotich, aged 42, also known as Buzeki has a net worth of $30 Million(Ksh3 billion). His income is largely from dairy, transport. Founder and Group Executive Director of Buzeki Group of Companies his Buzeki Dairy Limited in 2008 made the Tuzo and Molo milk brands largely enjoyed by Kenyans.

As a strategic businessman, in 2013, Bundotich sold his Buzeki Dairy business to Brookside Diaries owned by the Kenyatta family for KSh1.5 billion. Buzeki Group is a well-established company in the transport and logistics industry in Kenya worth billions of shillings.

Presently, Buzeki group has the following list of companies:

Pius Ngugi, aged 75, a business tycoon, worth $35 million (Ksh3.5 billion), engaged in Food Processing, and owns the Kenya Nut Company which he founded in 1974. Research has it that the company is presently the main exporter of macadamia nuts from Kenya and has over 2,500 employees.
In 2016, he made $60 million in revenue from exporting macadamia nuts from Kenya.

Other companies he owns include Thika Coffee Mills, a shareholder in the Tatu City development project and Kenya Alliance Insurance. Other interests includes dairy farming, Amazon Motors, manufacture of sweets and winery.

Adil Popat, aged 69, is one of the most successful car dealers in Kenya, worth $40 million (Ksh4 billion).

Also into hotels, he is the Group Executive Chairman of Simba Corporation which has interests in motor sales and service, hospitality, investment, and financial services.

The company founded in 1948 has grown into a billion shilling investment as he is the sole authorized dealer of Fuso, Mahindra, Renault and Mitsubishi car brands. The Group also owns the famous Villa Rosa Kempinski (Nairobi) and Olare Mara Kempinski (Masai Mara) hotels.

This is another popular name a ringing bell in Kenya. Jimnah Mbaru, aged 65, is a successful business man into investment banking, worth $48 million (Ksh4.8 billion).

He is the owner and Chairman of Dyer and Blair Investment Bank, which he acquired from KCB in 1983,  the bank according to statistics is the leading investment firm in Kenya with branches in Uganda and Rwanda. It has over $300 million (Ksh30 billion) in assets under management. Other interests arear where he has stakes are Equity Bank and Transcentury Group among others.

Aged 53, his worth is $50 million (Ksh5 billion), as his wealth is derived majorly from politics and business. Recognised as one of the self-made multi-millionaires in Kenya, here are the list of the companies and property he owns.

Mwai Kibaki & Family, aged 88, worth $60 Million (Ksh6 billion), is a self made man in Politics and properties. Mwai Kibaki was the third Kenyan President and one of the biggest landowners possessing thousands of acres of land around the country. Precisely, about 10,000 acres of land in each of the following places; Bahati, Nanyuki, Laikipia, and Rumuruti.

Samuel Kamau, aka S. K Macharia, aged 77, has a net worth of $150 million (Ksh15 billion) and founder of Royal Media Services in Kenya. His largest private television and radio network  in Kenya and East Africa. Some of its famous brands include Citizen TV, Inooro TV, Radio Citizen, Hot 96 among others.

Considered as one of the richest people in Kenya, he has a net worth of $170 million (Ksh17 billion), aged 56. His source of his wealth is mainly Equity Bank. Currently, he is the Managing Director and CEO of Equity Group Holdings Limited (EGHL). James is among the major individual shareholders of EGHL with a 5.52% stake. He also owns shares at British American Insurance Company Limited (Britam).

Founder and Chairman of Equity Group Holdings Limited (EGHL), a financial services holding firm based in Nairobi and is an owner of Equity Bank, one of the largest commercial banks in Kenya. The Group also has operations in Uganda, Rwanda, South Sudan, Tanzania, and DRC.

The company has a total of over 13 million customers and generates annual revenues in excess of Ksh19.5 billion. EGHL also controls assets worth an estimated KSh530 billion.

Chris Kirubi, with net worth of a $400 million (Ksh40 billion) into real estate, aged 78, is a successful business magnate and industrialist. He is a Director and the largest individual shareholder (with a 28.94% stake) at Centum Investments amongst others.

The son of Jomo Kenyatta and the 4th and current President of Kenya, is a successful businessman and one of the richest persons in Kenya, he worth US$500 million (Ksh50 billion).

Here are his assets:

The Executive Chairman of the Sameer Group, a business conglomerate based in Nairobi, is worth $600 million (Ksh60 billion). Aged 68, his business empire comprises 15 companies and has operations in Kenya and the rest of Africa.
Here are some of the businesses:

He has a net worth of $900 million (Ksh90 billion). Aged 88, his company, Bidco Africa, produces edible oils, fats, soaps and detergents, animal feeds, margarine, food, and beverages. It is based in Thika and also has operations in Central and Southern Africa. The company has manufacturing factories in Kenya, Uganda, and Tanzania.

The only woman amongst the richest Kenyans has a net worth of $1 billion (Ksh100 billion). Mama Ngina is the widow to Jomo Kenyatta, the first president of Kenya. She’s also the mother to Uhuru Kenyatta.
The family’s giant dairy company, Brookside, has acquired several rival dairy firms including Buzeki Dairy in 2013 for Ksh1.1 billion. Other acquisitions include Ilara, Delamere, SpinKnit, Molo Milk and Kilifi dairy brands.

With a net worth of $1.1 billion (Ksh110 billion), Biwott, now deceased, was the owner of Yaya Center (a shopping mall in Nairobi),  operates petrol stations across Eastern, Central, and Southern Africa.
Other investments are:

Aged 90, with a net worth of $1.7 billion (Ksh170 billion), Manu Chandaria is a Kenyan businessman, industrialist, and philanthropist of Indian descent.His company, Comcraft Kenya Ltd, which manufactures aluminum and steel products as well as plastics, operates in Tanzania, Ethiopia, and Uganda. Comcraft generates annual revenues of more than Ksh200 billion.

The richest person in Kenya, worth $3 billion (Ksh300 billion) is Daniel Toroitich Moi & Family. Daniel Moi (who died 4th Feb 2020), is a former politician who served as the second President of Kenya, an entrepreneur, investor, and businessman.
Daniel Moi and his family have interests in many industries such as:

Other business interests he pioneered are:

NEXT READ >> Kenya Ministers Earning More Than Their President 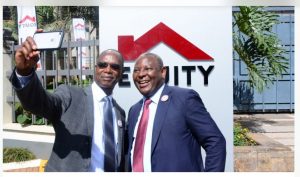 At Equity, a Tech-Driven Strategy Begins to Pay Off
The performance was aided by technology and innovation, which saw…