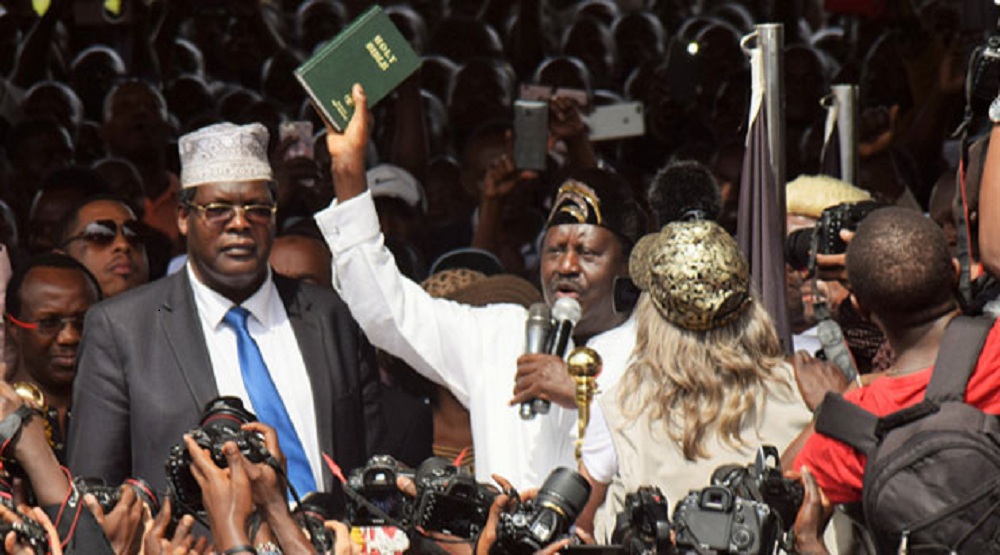 NASA leader Raila Odinga has edited the bio on his Twitter handle, moments after being “sworn in” as the People’s President of the Republic of Kenya.

His verified account now reads: “This is the official account of The Rt. Hon. Raila Amolo Odinga, President of the Republic of Kenya.”

Raila was sworn in at Uhuru Park grounds in Nairobi by Ruaraka MP TJ Kajwang in the absence of lawyer Miguna Miguna to the joy of thousands of his supporters.

“…I Raila Amolo Odinga, in full realisation of the high calling, assume the office of the People’s President of the Republic of Kenya…Today is a historic day for the people of Kenya, to say enough is enough with election rigging”, Raila said. He added he would issue a detailed statement later.

Though security was tight in the city, police did not interfere with the ceremony, which ended peacefully.

READ: Kanze Dena tears up as she reveals how she lost her kid

“I wish to thank the people of Kenya for the mandate they have given us and for their steadfast confidence in us. You came from all corners of the republic to witness my inauguration and it was good to see you out in millions,” he tweeted after the event.

Co-principal Kalonzo Musyoka, his running mate in last year’s election, was not present.

His absence delayed the function after he said he was “still consulting” following a government shutdown of the mainstream media.

But Raila said he was still in NASA and would take the “oath” at a later date but Opposition supporters were not impressed and took to the internet to generate funny memes to rebuke him.

Also absent were the other two principals, Musalia Mudavadi and Moses Wetang’ula. Citizen, NTV and KTN free to air channels were shut down by the Communications Authority but the media houses used internet streaming to air the ceremony.

READ: Check out tenders for both small and big businesses