Ol Pejeta Conservancy will be hosting a screening of the Kenya premiere of Kifaru, a Kenyan wildlife film about the story of Sudan the White Rhino, on October 24th.

Kifaru outlines the challenges of rhino conservation through the eyes of two Ol Pejeta rangers: James Mwenda and Joseph Wachira (Jojo). Mentored by the oldest member of the rhino unit, Jacob Anampiu, these two young men learn how to balance burning idealism with harsh realities.

“Filmed over the course of James and Jojo’s first four years on the job, Kifaru brings to light the heartbreak and determination that came with caretaking the ‘Ambassador of Extinction’ – the last northern white rhino male on the planet, Sudan,” said Richard Vigne, Ol Pejeta’s Managing Director.

At the age of 45 Sudan was euthanized in March 2018 due to age-related issues, but not before inspiring hundreds of thousands to do more for rhino conservation. The elderly rhino was being treated for degenerative changes in his muscles and bones, combined with extensive skin wounds.

Unable to stand up and suffering a great deal in his last 24 hours, Sudan was put down by veterinarians at the Ol Pejeta Conservancy. Unfortunately, Sudan’s death leaves just two female northern white rhinos on the planet; his daughter Najin and her daughter Fatu, who remain at Ol Pejeta.

The only hope for the preservation of this subspecies now lies in developing in vitro fertilization (IVF) techniques using eggs from the two remaining females, stored northern white rhino semen from males and surrogate southern white rhino females.

Director David Hambridge said the film mirrors a perspective from which the tragic plight of the world’s most endangered species could be humanized, transcending cultural barriers to expose the mortifying truth of humans’ atrocities on nature.

“Great stories always contain universal truths, which often serve as the NorthStar for future decisions. While striving to expose these truths, I’ve always been interested in telling stories that transcend cultural barriers and invoke empathy that all corners of humanity can identify with. We believe the greatest weapon these caretakers have in this fight for an entire species are their stories. I believe viewers will finally get to feel extinction for the first time – and hopefully the last,” Hambridge said.

Since Sudan’s death, James and Jojo have travelled all over the world to share their stories, gathering support and raising awareness for the wildlife they have become so passionate about. Kifaru is a film that will spark a new era of conservationists, uniting people from all over the world in the fight for wildlife. 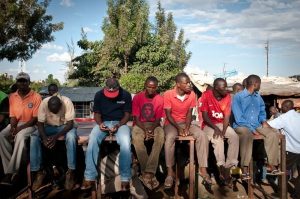