Continuous police harassment has led to five professional footballers playing in the National Super League to flee their training camp in Nairobi.

This comes as a blow to the club as their first choice goalkeeper is among those who fled. The Northern Wanderers players claimed that the police have raided their house thrice in just a span of one week. It is the first time that the Northern Kenya side is playing in the National Super League.

The players are said to have returned to northern Kenya after police officers raided a house where the team has been staying in Buruburu. They were forced to pitch camp in the Capital after Football Kenya Federation (FKF) failed to find a standard field in Northern Kenya where they would host some matches.

The relocation forced the team’s financiers, among them National Assembly Majority Leader Aden Duale, to rent a six-bedroom house in Buruburu to accommodate the players numbering 18. The club has also leased a training ground in Nairobi, with Camp Toyoyo grounds in Jericho Estate being the team’s home ground.

As quoted by Nation Sport, Babel believes the team’s run of poor results could have been avoided had they settled in Nairobi and felt at home. He termed the continuous harassment of the players by police as the reason behind the poor results.

The presence of the players in Buruburu must have been a source of concern to neighbours who tipped off police officers. The weight of the issue prompted the service unit to send the Anti-Terrorism Police Unit (ATPU) to the house in Buruburu.

“They requested us to avail ourselves at the ATPU offices the following day where they took our fingerprints and interrogated us for the better part of the day, leaving my players traumatised. Three players left for their homes the same day. A few days later, officers attached to Buruburu Police Station raided the same house and took the players back to the station for questioning. They were released without any charges being preferred against them. Days later, the players found themselves in trouble with officials conducting the national census and were questioned by Administration Police officers. Two more players fled thereafter, leaving us with 24 players,” Babel said.

The Northern Wanderers are currently last on the NSL table after playing two matches. Fellow new entrants Vihiga Bullets stand at 18th on the 20-team table while APS Bomet is 17th. Murang’a SEAL are surprisingly 8th in the NSL after winning their first match against Kibera Black Stars. 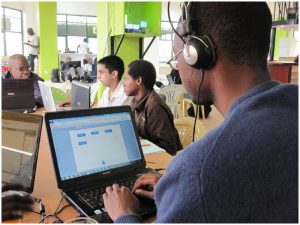 Tech in Kenya Needs to Improve. This is How
Gains in the tech space still leave Kenya way off…