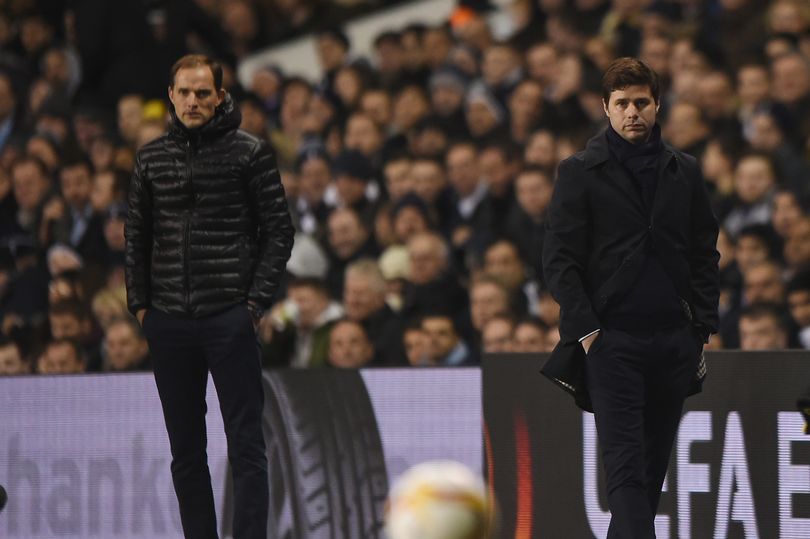 Sacked PSG Manager Thomas Tuchel (left) and Mauricio Pochettino patrol the touchline during a past European tie. The latter is set to take over at PSG

Former Tottenham Hotspur Manager Mauricio Pochettino is reportedly in line to become the new manager of Paris Saint-Germain after Thomas Tuchel was sacked on Christmas Eve.

Tuchel leaves the Parisian club one point behind league leaders Lyon and with PSG having secured their spot in the last 16 of the Champions League, eliminating Manchester United in the process, earlier this month.

Ironically, Pochettino has over the last year been linked with the Manchester United job with many pundits and fans questioning Ole Gunnar Solskjaer’s credentials to lead the British club back to its former glories.

That however did not materialize with Manchester United’s form improving after being jettisoned out of the Champions League.

Various reports suggest Pochettino has reached a deal to take over at the new money club backed by Qatar.

Tuchel has been reportedly sacked after he gave an interview in his homeland before PSG’s game against Strasbourg on Wednesday in which he was quoted as saying he had, at times, felt more like “a sports politician or sports minister than a coach” during his time at the helm of PSG.

After the win over Strasbourg, he had attempted to clarify those comments to Canal+.

“I didn’t say it’s more about politics than sport, nor that I lost the fun of training. This is not true… It is possible they translated incorrectly.

“Watch the video interview. I just said that PSG are unique and that it’s a big challenge for me. It’s always been like that.

On the other hand, Pochettino has been out of a job since being sacked by Tottenham one year ago. Since then his availability has cast doubt over the jobs of Solskjaer and Real Madrid Manager Zinadine Zidane during various spells when the clubs’ performances dipped,

Speaking last month in an interview with Sky Sports, Pochettino said he was waiting for the right opportunity to come along before getting back into management.

He said: “My energy is full, I’d love to be involved in the game but at the same time I need to understand that at the moment is a good moment that you need to wait.

“You need to wait for the right project and for sure football is going to bring what football wants and we need to be open and to accept or not.”