About one million people in the country are facing drought and hunger with two people reported dead of starvation in Turkana county with many others staring at the same fate.

The two, a man and a woman, are said to have died last week while searching for food.

The woman, a charcoal burner, was found dead about six kilometres away from Kangi’irisae centre in Turkana Central Constituency.

“The woman was found dead on 5th March. She had gone to burn charcoal which she wanted to sell so a to buy food,” said John Ekwar, the location senior chief confirming the incident.

The Ministry of Devolution has further warned that more than 14 counties are facing extreme hunger.

Devolution ministry has requested for funds from the national treasury to curb the situation before turning into a national disaster.

“From our estimation is that we need between Sh6 billion to Sh8 billions to tone down the hunger arising from the ongoing famine,” said the Chief Administrative Secretary Hussein Dado to the Senate Committee on Devolution and Intergovernmental Relations.

The National Drought Management Authority (NDMA) had cautioned that arid and semi-arid regions to anticipate decline in water, food and pasture due to the declining trend of poor rainfall experienced last December.

The agency had projected that at least 23 counties will face drought across the country since November 2018 to May 2019 due to the poor rainfall and locust infestations.

The drought, according to the agency is expected to worsen in the next two weeks with starving people in the various regions being said to be too weak to reach food distribution centres.

Bore holes and other water bodies have also dried up as cattle drop dead due to the ongoing drought.

With rainfall missing in a duration of nine months for some of the counties, drought menace has been experienced in the arid and semi-arid regions since October 2016.

In February 2017, drought and famine hit over 15 counties and persisted into 2018 exposing more than three million people to starvation. The epidemic was declared a national disaster by the government. 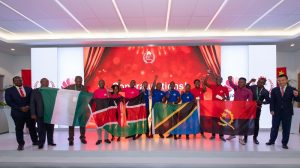