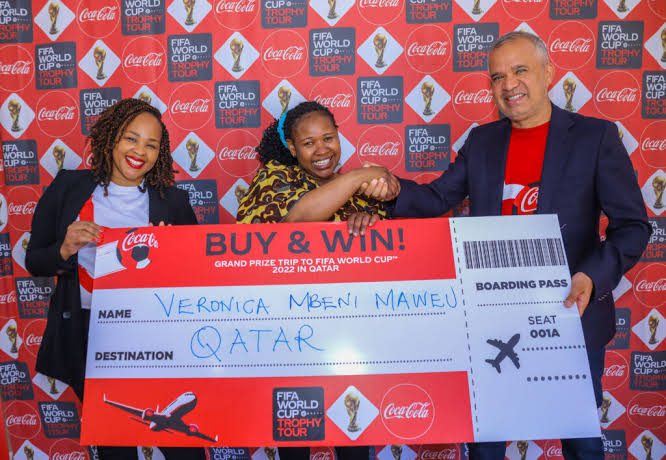 Veronica Maweu, a mother of two from Kayole, is the first winner of a fully paid trip to Qatar to watch two matches of the 2022 World Cup live, courtesy of the ongoing Coca-Cola’s FIFA World Cup Buy and Win Promotion in Kenya.

Ms. Maweu will fly to Qatar on a fully paid trip to watch a live World Cup match during the FIFA World Cup tournament taking place in Qatar from November 21 to December 18 this year.

The 34-year-old Maweu was announced winner during the first draw of the ongoing Buy and Win promotion by Coca-Cola that was launched in April, when the Company also announced a partnership with FIFA, the international governing body of Association football, to bring the original FIFA World Cup Trophy to Kenya on May 26th and 27th, 2022, for a fan experience ahead of the tournament in Qatar. Besides giving Kenyans an opportunity to see the Trophy live in Nairobi, the Coca-Cola promotion is also giving five consumers a chance to win tickets to Qatar to watch selected games of the World Cup live, alongside other instant prizes that participating consumers stand a chance to win.

“I run a small shop where I sell everyday items including Coca-Cola products and I had heard about the promotion on radio and seen it being advertised on TV, so I decided to try it out. I did not expect to win the ticket to Qatar, but I am very happy that I did, and I am grateful to Coca-Cola for awarding me the ticket. I look forward to going to Qatar alongside the other winners,” said Maweu.

“We are very excited to hand over the first ticket to Qatar to Ms. Maweu who is our first winner of the trip. The 34-year-old Ms. Maweu will get a 5-day all-expenses paid trip to Qatar which will include tickets to watch two matches live during this year’s World Cup tournament. There are four more tickets to go, and we encourage our consumers to continue participating in the Buy and Win promotion as there are lots of prizes to be won, beside the four remaining tickets to Qatar. All five grand ticket winners will get the full Qatar experience in November when they travel for this magical opportunity.” Said Ezile Bubu, Country Channel & Trade Marketing Manager at Coca-Cola Beverages Africa – Kenya.

The Buy and Win promotion by Coca-Cola is part of the activities to engage consumers and football fans ahead of the FIFA World Cup™ Trophy Tour by Coca-Cola which will stop in 51 countries and territories, bringing Coca-Cola and FIFA one step closer to the goal of visiting each of FIFA’s 211 member associations by 2030. For the first time ever, the tour will visit all 32 countries that qualified for the FIFA World Cup™, inspiring fans across the world through exclusive consumer experiences. Kenya is one of only 9 African countries selected for the Trophy tour.

To participate in the promotion, consumers are required to purchase 1Litre, 1.5Ltr or 2Ltr Coke, Fanta, or Sprite, check the code under the cap and SMS the code to 40111 for a chance to win daily and weekly. Once the consumer wins a prize, they receive an instant message with details of the win & collection process. Consumers have a chance to win amongst other prizes; cash, airtime, tickets to the VIP viewing experience of the FIFA World Cup trophy on the 27th of May in Nairobi when the Trophy is in Nairobi, as well as the top prize of a trip to Qatar.

The FIFA World Cup Trophy is set to arrive in Kenya on the 26th of May to a series of activities ahead of the consumer viewing experience at the KICC grounds on the 27th of May 2022. Consumers and football fans will be treated to a fun-packed day which will include a concert, experiential activities, and the opportunity to view and take photos with the original FIFA World Cup Trophy. This is the same coveted Trophy that will be handed to eventual winners of this year’s World Cup Finals. Coca-Cola is the official sponsor of the 2022 World Cup and has partnered with FIFA to facilitate the Trophy Tour to selected countries in the world.