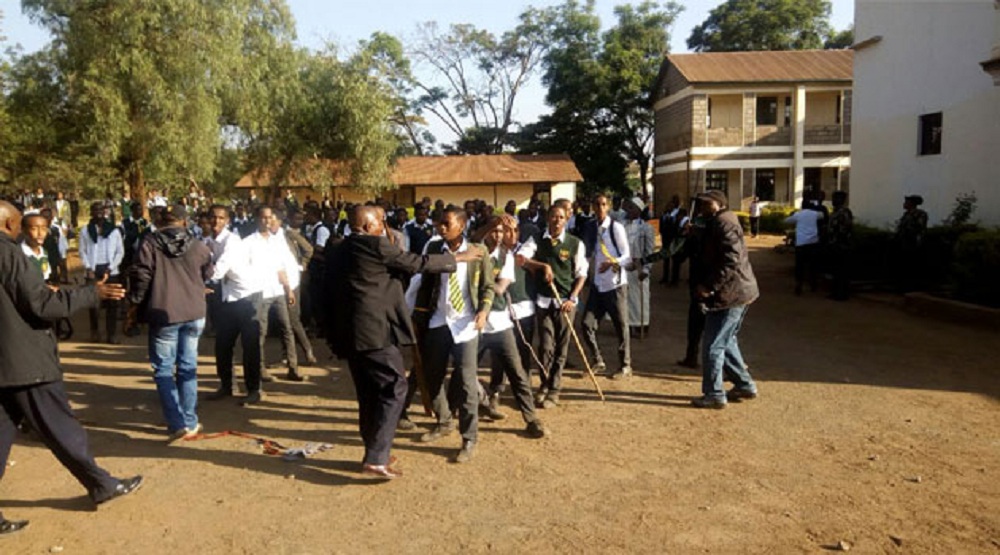 The Jamhuri High School was closed Wednesday after a riot broke out leaving five wounded.

The riot started in protest against what the school’s Muslim students complained was mistreatment by the principal.

The decision to close the school until Monday was arrived at during a crisis meeting between the parents, the school’s Board of Management, officials from the Ministry of Education and Nairobi Police Commander Japheth Koome.

Board Chair Lorna Mumelo said the closure is aimed at allowing the school management and the ministry officials time to address the root causes of the disturbance.

The board chairperson was vague with her answers even though there were accusations that some students had carried weapons like swords to the school to orchestrate the riot. “We are going to do investigations and maybe establish what happened,” she answered vaguely.

The journalists would not let her off the hook, pressing hard to establish why the school administration had not taken any action even though reports indicate that the tensions started to build up on Saturday.

It was hard to establish the real cause of the problem with different groupings giving their version of the story laced with accusations and counter-accusations.

According to reports, the tension that broke out today is not new and there have been isolated cases of fights between students.

While showing a medical report, Asli Abdullahi claimed that his brother goes to the school was attacked by four boys but there was no action that was taken.

“My brother came home with bruises saying he was attacked by four students, we took him to the hospital and here is the report but no action has been taken.”

The School Principal Fred Owuor admitted that there could be an issue and said a disciplinary Committee had been put in place to investigate the issues that led to the escalation of the situation.

“There is no school that has no problems,” he said.

The students who started the riot have accused the School’s Principal of playing favourites in his management of the school’s affairs.

However, even after the students had been dismissed, two of them began fighting in full view of the police and parents.

The police moved to contain the situation whisking away the student who was about to receive the wrath of angry parents.