House prices were generally stable although with signs of softening. The house prices increased by 1.35% for the quarter, representing a 0.41% decline from the 1.76% rise during the second quarter of 2018, the Kenya Bankers Association (KBA) Housing Price Index (KBA-HPI) for the third quarter of 2018 shows.

The softening in house prices manifested in the gradual decline in the rate of price growth seen over
the first three quarters of 2018 is a reversal of the up-tick seen in the noticeable rise observed from the fourth quarter of 2017 to the first quarter of 2018.

The state of affairs in the market is a reflection of subdued demand on the back of continued investments in the housing market which remains skewed towards the middle and high income bracket. The overall stability in house prices is inferred from the changes in the KBA-HPI remaining under 1%. This is due to the fact that the market dynamics are tilted towards the influence of demand conditions and are likely to respond to the anticipated changes on the supply side once the developments under the government’s affordable housing initiative come on stream.

The risk appetite of both developers and financiers is equally anticipated to adjust in line with the above observed market dynamics.

While the KBA-HPI index remains on an upward trajectory, the fixed base index shows a sustained decline over the past three quarters during the third quarter of 2018 to stand at 118.75 while the moving base index continued to maintain its positive outlook. 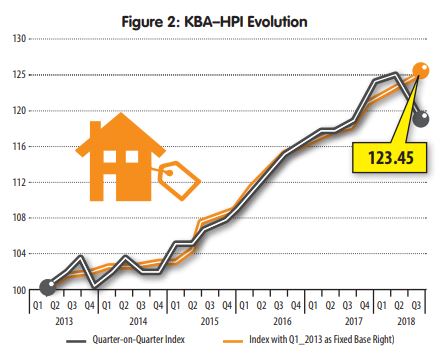 Similarly, whereas the KBA-HPI index has continued to rise (Figure 2), the rise in house prices has been mild suggesting a sense of broad market stability.

The drivers of house price movements in the third quarter of 2018 remained unchanged
from those of the previous three quarters. This signals consistency in home owner’s preference. The taste consistency is confirmed by comparing the estimates of the hedonic function in Quarter 3 of 2018 and the estimates of Quarter 2 of 2018 and Quarter 1 of 2018. 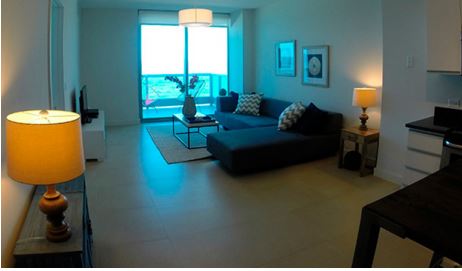 However, unlike in the previous quarters, the size of the house as measured by the plinth area was
insignificant though other attributes relating to size; the number of bathrooms, presence of a backyard and master ensuite attributes continued to feature prominently in influencing house price movements during the third quarter of 2018, except that demand for houses available in the market were depressed.

Similarly, on the downside, prices were depressed by the number of floors, an indication that home owner’s preferences were more inclined to stand alone units. In addition, the presence of wooden floors and the age of the house negatively affected house price movements. 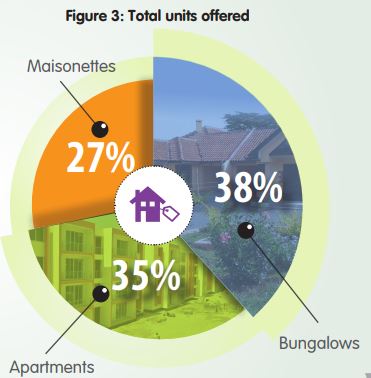 Whereas the KBA-HPI index shows that there was a 1.35% rise in house prices, the interaction of
supply and demand dynamics saw home owners preferences tilt towards bungalows accounting
for 38%, apartments accounted for 35% and maisonettes accounted for 27%. This is a reversal of the dominant position maintained by apartments in the preceding four quarters.

The extent of dynamism in home owners’ preferences with respect to region reveals that the market appears to be skewed to the upper market segment. In addition, the fast-changing preferences imply developers must be abreast with the rapidly changing market preferences.