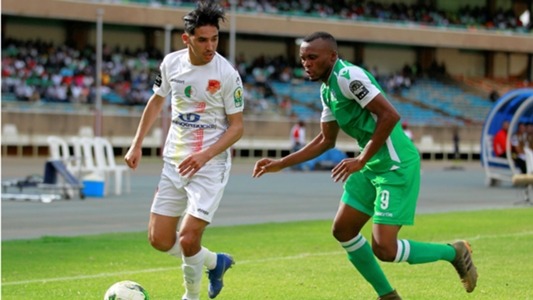 Gor Mahia did not even manage a draw in both occasions they played North African clubs, Egypt's Zamalek and Hussein Dey of Algeria in the group stage of the competition.

After literally fighting for a spot in the quarterfinals, Gor Mahia have to make yet another trip to North Africa to face Moroccan side Renaissance Sportive de Berkane or as it’s known for short, RS Berkane. The two sides have never met in the history of African club football.

In a draw held in Cairo, Egypt, the 17-time Kenyan champions were drawn with RS Berkane in the quarterfinals. Gor Mahia did not even manage a draw in both occasions they played North African clubs, Egypt’s Zamalek and Hussein Dey of Algeria in the group stage of the competition.

Gor Mahia has already made history by becoming the first Kenyan side to qualify for the CAF Confederation Cup quarter-finals. The Kenyan giants capitalised on home matches to qualify for the quarters as they won all their three home fixtures.

After the draw, Gor Mahia coach Hassan Oktay admitted that he has a lot of homework to do as he does not know a thing about their opponents. You cannot blame him as the team has very little online presence, perhaps it’s their strategy to hide their information from opponents. Maybe it is part of their plan to hit you with a surprise.

“Now I’ve a lot of homework to do; research about their strengths and weaknesses, what kind of formation they play, who they are. As you know, Kenya has no enough technology to help me do this, either way, we’ve to know how to punish them,” Oktay said as quoted by Nation Sport.

Who are RS Berkane? Well, we all know that they are a Moroccan Club which plays in the country’s top flight league. Berkane finished 2nd last season in the Moroccan Championship, Botola. They have had a good run in the group stage losing only once, drawing twice and winning the rest of their total six fixtures.

Berkane, who were pooled alongside Hassania US Agadir (HUSA), Raja Club Athletic and Association Sportive Otoho D’oyo, only lost against HUSA in their last group stage fixture. Compared to Gor Mahia’s three losses, Berkane appears to have the advantage but Gor has an exemplary home performance as they won all of their matches in Kenya.

The first leg of the fixture will be played in Kenya and K’Ogalo should target to score as many goals as they can because their away form in the competition has not been as good. Although judging from the amount of players Gor will miss in the first leg fixture, they are likely to struggle in the fixture. A total of five players are expected to be out of Gor’s squad for the first leg of the quarterfinals due to suspension.

Captain Harun Shakava will miss the fixture having picked his second consecutive yellow card in the 1-0 win against Petro Atletico last Sunday at Kasarani stadium alongside midfielder Ernest Wendo and left back Shaffik Batambuze, who were red-carded in the fixture. Goalkeeper Peter Odhiambo and lead striker Jacques Tuyisenge will also miss the home fixture after picking two subsequent yellow cards.

Berkane, on the other hand, have full services of their top striking duo that have together scored 24 goals in the local league. The 25-year-old duo of Moroccan Ayoub El Kaabi and Ivorian Soro Nanga will be leading the front line of RS Berkane. El Kaabi was the top scorer in the local league in the 2015/16 season. Another star in the team is Togolese striker Kodjo Fo-Doh Laba.

K’Ogalo must also up their away game if they are to qualify for the semis as this time they might not get a home advantage with almost half of the first squad out. In the second leg, the players will return to boost the team and it is in that leg that Gor will have enough bullets to thrash the Berkane based club.

Gor Mahia is set to play the first leg on April 7th at Kasarani while the second leg is slated for April 14th at the Stade Municipal de Berkane in Berkane, Morrocco.