Ms Tamura came under vicious attack from Kenyan on Twitter (KOT) who condemned NYT for using a photo from the scene of the attack which showed dead bodies. Kenyans online were drawn to her article titled Shabab Claim Responsibility for Deadly Assault on Nairobi Hotel-Office Complex where the photo was used.

This resulted to KOT bashing international media outlets for using graphic content in reporting attacks in Kenya unlike in their home turf when such events occur making photographs of African victims more in commonplace. However, FCAEA has backed Ms Tamura’s explanation over the use of the photograph citing that she did not have authoritative control of the photos used in the story.

“The FCAEA condemns the extremely aggressive and personal attacks through social media against Kimiko de Freitas Tamura of the New York Times for photographs selected not by her, but by her editors in New York, and used alongside her reporting,” stated a circular sent to media houses.

Ms Tamura, nevertheless, asked the angry KOT to ‘direct your anger to the photo department’ in her twitter handle. She later deleted the tweet. 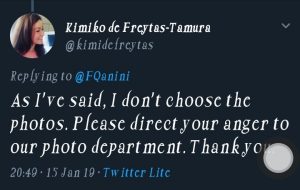 The response of Ms Tamura on twitter was termed as ‘arrogant’ and ‘insensitive’ leading to Kenyans online to ask for her deportation and cancellation of work permit in a hashtag #DeportKimiko.

FCAEA said that they are disturbed by the personal attacks on Kimoko and general stoking of anger against foreign journalists working tirelessly and at personal risk just to tell a story in the country.

“The choice of images used in a time of tragedy is a difficult balance and something editors in newspapers, television and online media constantly battle to get it right. Different publications have different guideline,” added the statement.

SEE ALSO: HOW NSE PERFORMED IN AFTERMATH OF RIVERSIDE ATTACK

“We ask that hate speech is not used against us through social media, that we do not become a punching bag for understandable anger and frustration, and ask that the citizens support us as we strive to truthfully and accurately report events in Kenya.”

Although NYT offered Kenyans apology on twitter and through Ms Tamura, the graphic images has not been pulled down from the article by the time of publication of this report.

I apologize on behalf of @nytimes and @nyphoto for causing anger and anguish over the photos that have been published with our reporter. Thank you.

This apology resulted to celebrities and veteran journalists to condemn the defiance by NYT calling for the publisher to pull down the photos which are still present in the article.

Furthermore, NYT have hid behind their publication guidelines justifing that they had to use the photo to expose the reality of the terror.

“We want to be respectful to victims and to others affected by the attack. But we also believe it is important to give our readers a clear picture of the horror on an attack like this. This includes showing pictures that are not sensationalized but that give a real sense of the situation,” read a statement by NYT.

A political scientist and researcher in Africa Ms Rachel Strohm tweeted that the foreign corresponds who enjoy much privileges in Africa have missed the point which was to pull down the picture from the article. 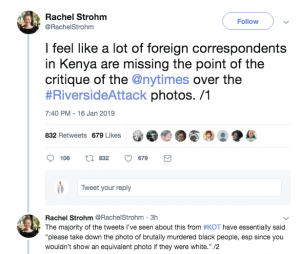