The Department of State and Federal Bureau of Investigation (FBI) have partnered together to assist Kenya in creating the first Joint Terrorism Task Force (JTTF).

This is the first such task force to be located outside of the United States.

The Kenyan-led JTTF will be a multi-agency counterterrorism investigative force in Nairobi, Kenya.

A statement from the spokesman notes that the initiative to establish a Kenyan Joint Terrorism Task Force (JTTF-K) began after the al-Shabaab terrorist attack on the DusitD2 Hotel in Nairobi, Kenya on January 16, 2019.

“There was a pressing need for a JTTF that could be met through the FBI’s training expertise combined with the State Department Bureau of Counterterrorism’s (CT Bureau) capacity-building efforts.”

Partner Nations on the Frontlines of Terrorism

The 42 selected Kenyan investigators will receive a 12-week intensive counterterrorism training at the FBI Academy in Quantico, Virginia. The FBI will administer the curriculum and provide training with assistance from other agencies, as applicable. FBI and the CT Bureau will collaboratively assess the programme.

This team will adopt methodologies used by US-based JTTFs and be trained to handle sensitive counterterrorism intelligence shared with the Kenyan government.

The investigators will be trained and equipped to investigate all terrorism matters deemed of significant importance to Kenya’s National Security Council.

Upon completion of the course, the JTTF-K officers will return to Kenya, where they will be assisted by an FBI Special Agent mentor.

Investigations conducted by JTTF-K will be carried out in accordance with international law enforcement standards and in comportment with human rights.

Legal authorities will be derived from the Kenyan Constitution and International Treaties. Cases will be prosecuted in Kenya’s courts, which promotes the US goal of enabling foreign partners to successfully counter terrorist threats.

The JTTF-K is being funded by the Department of State’s Bureau of Counterterrorism under the Counterterrorism Partnership Fund, which was established by Congress to build the law enforcement capacity of partner nations on the frontlines of terrorism.

It is part of a comprehensive programme with Kenya to promote terrorism investigations and prosecutions, enhance crisis response, and strengthen border security.

The 48 commando officers drawn from the Administration Police Service (APS) have undergone a five-month physical and combat drilling.

This is the first phase of their 15 month-long standardized training programme.

At the passing-out ceremony in Ngong, Cabinet Secretary for Interior and Coordination of National Government, Dr Fred Matiang’i, said the feat comes at a time when Kenya seeks to handle emerging security threats and hostage crises promptly and with precision.

“What we have witnessed today gives us confidence as the government that we have the capacity to protect our people and secure our country. This is a momentous day for our country because we can now rest assured that we have more officers who can undertake intricate security operations that require specialized approaches,” he said.

Matiang’i added that the team will greatly supplement the existing efforts of securing the country. 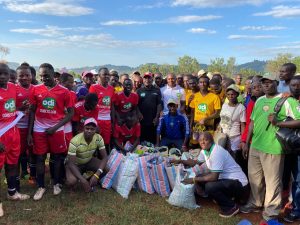 Boost For Grassroots Football in Kisii, Nyamira as Teams Receive Free Jerseys
Over a month after the Football Kenya Federation (FKF) inked…