Students at Starehe Girls Centre have been sent home and the school closed indefinitely after a yet to be identified disease outbreak at the institution.

Early this morning, the school was closed with limited access only allowed to parents of students who were to go home.

The disease has left more than 50 students confined to their beds and isolated from the rest.

Those affected exhibited symptoms which included sneezing, a high pitched cough and a low-grade fever.

In a brief to newsrooms, the school’s director, Sister Jane Soita said that test results are expected today.

Soita added that the Kenya Medical Research Institute (Kemri) and the Centre for Disease Control (CDC) were analysing samples collected by doctors from the Integrated Disease Surveillance Response Department.

The school has notified parents and guardians of the affected girls.

Starehe Girls Centre was conceived as a charitable national girls’ high school to cater for bright but economically and socially disadvantaged girls.

“The establishment of the Centre was as a result of concerted efforts of individuals who envisioned an institution with a holistic education approach,” says a statement on the school’s website.

The institution is located in Bustani Estate at Njathaini, off Kiambu Road.

The school’s leadership is comprised of a Director, Chief Principal, Deputy Principal, a staff of forty teachers and forty-eight non-teaching and support staff.

Starehe Girls has 560 students 480 of whom are sponsored students. The remaining 80 are self-sponsored.

The school has registered an impressive growth in the number of students pursuing university education. For the past ten years, 95% of students have been admitted into various public universities while a few have gone to international universities.

Others have pursued diploma courses.

This was after the collapse of the Precious Talents School where seven pupils lost their lives.

Magoha maintained that students are safe in schools.

After touring the ill-fated institution, Magoha’s teams have been moving around the country where a number of schools have been closed due to the unsafe nature of some of the structures.

On the Starehe Girls Centre case, officials from the Ministry of Education and Starehe Girls heads are currently in a crisis meeting.

Questions abound however over the release of the girls without the symptoms into the general populace.

Arguments are that the school should quarantine the students in the school until it is established what the disease is. 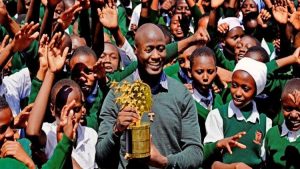