President Uhuru Kenyatta’s social media accounts have been deactivated following a cryptic tweet in which he reiterated his unwavering stance in the war against corruption.

The tweet was transcribed from a speech the president made to Kenyans living in Windhoek, Namibia but the Presidential Strategic Communications Unit (PSCU) seems to have made a blunder.

PSCU edited part of the video clip sent to newsrooms where the President fired a warning to his ‘close political allies’ saying that he will not tolerate corruption in his circles.

While the words ‘political ally’ featured in the tweet, they were edited out in the video.

“You can be my brother or my sister or my closest political ally but if you are corrupt we will fight you,” read the tweet. 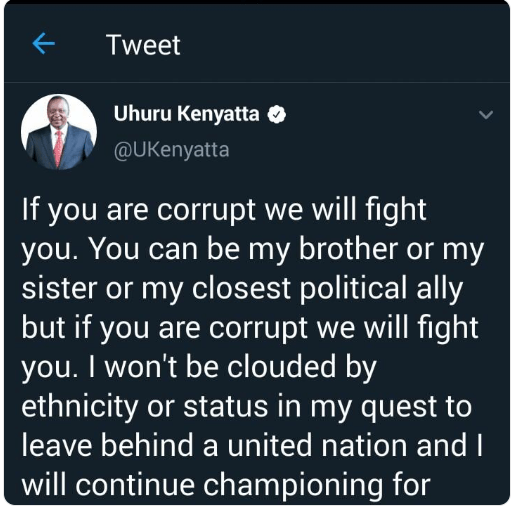 Chief of Staff in the Office of The President and head of the Presidential Delivery Unit (PDU) Nzioka Waita has since defended the decision to deactivate the president’s social media pages saying they had been hacked.

It seems the President’s stand on corruption has generated all manner of reactions.

The events quickly generate debate online with Kenyans asking whether the social media accounts were deactivated after it was realised that the message to the ‘political ally’ could have been misconstrued to soil the reputations of politicians who worked to ensure that the president was elected.