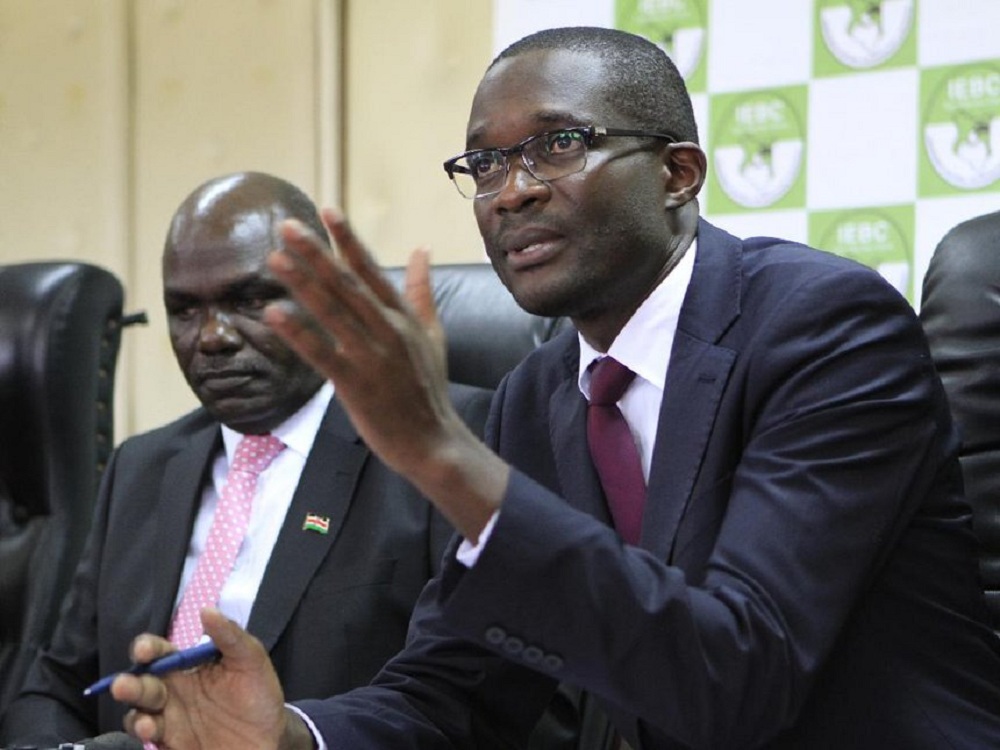 It is understood that the chairman and three other commissioners asked Chiloba to go home “because of procurement issues”.  It was not immediately clear yesterday what the issues are, although Chebukati has previously raised questions regarding a number of technology-related procurements.

According to sources within the commission, Chebukati wants a number of issues investigated while Chiloba is away.

By 7 pm last evening, Chiloba had not returned a call to the Star as promised.

The effect of the move is to destabilise the commission, which is to conduct vital boundaries delineation with implications for the next election. It makes work difficult or impossible because the CEO by law makes the day-to-day decisions; other commissioners cannot. It creates fear in the commission that others may be targetted.

Chebukati and Chiloba have not had a cordial working relationship since the CEO resumed work this year.

The Opposition has demanded Chiloba’s removal, saying he rigged the bungled August 8 election, in which Uhuru Kenyatta was declared the winner.

It said he could not be trusted to oversee the October 26 presidential rerun.

Chiloba had taken leave from mid-October and only resumed work in January. Commission sources said the two were not seeing eye to eye and rarely spoke to each other.

The decision to send Chiloba packing was made last week. Attempts to serve him with the suspension letter on Friday failed because the CEO had left his office before the letter was delivered.

“It was taken to his office but the secretary refused to receive it and insisted that the bearer should serve her boss himself,” a senior IEBC official said.

Commissioner in charge of Human resources Boya Molu is expected to hand Chiloba the letter this morning.

According to Chebukati’s personal assistant Wilfred Lusi, the IEBC boss flew out of the country to Nigeria on Saturday and will back on Friday.

Three commissioners — Chebukati, Abdi Guliye and Molu — reportedly made decision that has divided the commission and sent panic throughout the secretariat.

Two commissioners — vice chair Consolata Maina and Paul Kurgat — are reported to have opposed the decision. Maina is said to have protested the move and stormed out of the meeting, saying she would not be party to the decision.

Yesterday Maina said she had left early on Friday and didn’t know about any commission resolution to suspend the CEO. “The best person to call is the chairman,” Maina said.

Chebukati’s phone was off most of the day and text messages went unanswered. On Saturday he had flown to Nigeria and was to return on Friday.

All the other commissioners, including Molu who is in charge of Human Resources issues, did not return calls or text messages seeking comment.

Multiple sources within the commission told the Star yesterday that Chiloba’s suspension could mark the start of radical changes at the commission.

In December last year the commissioners went to Naivasha on a  retreat in which they made wide ranging recommendations.

Among other things, the commissioners agreed to cut down a number of directorates and also reduce the managers.

Chebukati has not been on good terms with Chiloba since the Supreme Court annulled the August 8 election, citing massive irregularities and illegalities.

Since then Chebukati tried unsuccessfully to force out Chiloba and the opposition alliance NASA accused the CEO of working for Jubilee to steal elections.

Two leaked confidential memos by Chebukati in the lead-up to the repeat presidential poll last year made waves at the IEBC and further exposed the differences between the chair, other commissioners and Chiloba.

In one memo Chebukati instructed Chiloba to suspend three officials believed to have messed up the August 8 voting. Chiloba did not implement the directive.

The memo cited “some  ICT staff who were incompetent or deliberately and grossly misconducted themselves by carrying out acts of malpractice.”