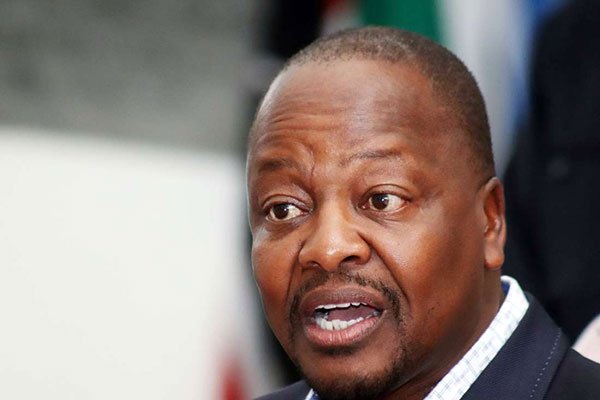 Health Cabinet Secretary Mutahi Kagwe. He has been implicated in the theft of COVID-19 Funds.

In the court of public opinion, the fate of Health Cabinet Secretary Mutahi Kagwe and his Principal Secretary Susan Mochache was pretty much sealed when suspended Kenya Medical Supplies Authority(KEMSA) Chief Executive Jonah Manjari told senators on Friday that his two bosses pressured him into awarding tenders at inflated costs to specific companies.

According to Manjari, Kagwe and Mochache remote controlled which companies received the multi-million tenders which have now been exposed as belonging to financiers of the ruling Jubilee Party. But there’s one downside, as per Manjari’s account, the Ministry of Health honchos never gave the directions formally, stating that they did so via text messages and calls.

In May, President Uhuru Kenyatta reacted angrily to criticism after reports of theft at Afya House in the context of COVID-19 first emerged when it was reported that Ksh4 million had been spent to buy tea and snacks dismissing his critics as “petty” and went ahead to assure Kenyans that every shilling meant for the fight against COVID-19 would be accounted for.

That now seems like a distant dream, as more details regarding the theft continue to filter in albeit with major twists and finger-pointing.

The villains? Kagwe, Mochache and the top brass at KEMSA.

PS Mochache has now come out swinging. The embattled PS has written to KEMSA challenging the institution to produce evidence of the alleged collusion.

“If indeed you stand by the allegations that you were given the instructions by the ministry regarding which suppliers to procure from and at what prices, please provide the letter that had such instructions including any communication to you on this matter which bore instructions as to where to source the items and their prices,” PS Mochache wrote in the letter.

No Kenyan government official has ever taken responsibility for a corruption scandal when it first erupts, the drill involves them being pushed out and the scenario here in its initial stages is no different.

PS Mochache in her letter said her communications to the authority were only tailored to see it through that KEMSA’s procurement was within the availed budget.

The budget is said to have been overshot to Ksh7.6billion when the KEMSA boss disregarded warnings from his procurement officer in issuance of commitment letters to procure the emergency supplies.

Reports indicate that Kilig Limited, a company listed as being one of the biggest beneficiaries of the KEMSA dealings was neither paid nor did it supply KEMSA despite receiving commitment letters from the agency.

The company was tasked with delivering the supplies within 15 days but KEMSA cancelled the commitment letter after the company failed to honour its end of the bargain within the stipulated timeframe.

Kilig Limited however appealed the cancellation indicating challenges in shipping and logistics arising from the COVID-19 pandemic.

The company then issued KEMSA with new dates for the arrival of the emergency supplies with the deadline penciled in for July 22.

Manjari then circled back with a second commitment letter to Kilig Limited extending the delivery period for the supply of the PPE kits.

However, KEMSA cancelled the commitment letter for a second time citing budgetary constraints.

Kilig has been linked to former Jubilee Party Vice Chairman David Murathe while the names appearing in the company’s registration documents are those of his proxies.

Murathe has however denied doing any business with KEMSA and has shifted the blame to CS Kagwe.

“Mutahi should tell us who this mafia at Afya House are because they have names and faces. You can’t put everyone in the same box. I am not defending KEMSA. I have never done any business with KEMSA and I don’t intend on doing any business with them,” Murathe told journalists this week.