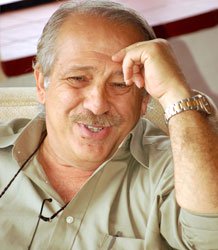 Former Taita Taveta MP Basil Criticos poses during a past event. He is being sued for Ksh25 million and 100 acres of land by a former alleged lover.

Victoria Anna Hill, a woman who claims to have lived with former Taita Taveta MP Basil Criticos for eight years has asked the court to compel the former legislator to pay up Ksh25 million that she claims to have loaned to the latter to expand his businesses as well as 100 acres of land that he promised her as a ‘gift’ for their eight years of cohabitation.

Ms Hill who has been in court since 2015 burying the MP in paperwork claims that the two lived together since 2006 to 2014 when she invested heavily in the MP’s businesses, assertions which have been dismissed by the politician’s who now claims that the lady is an opportunist who took advantage of her position in one of his firms to set herself up for a huge payday from his multi-million business empire.

“I have never cohabited with her as common-law partners as I have been happily married to Barbara Kirwan Criticos for 18 years. I do not understand the basis of her claims as I only contracted her as an interior decorator at my property known as Grogan’s Castle,” Criticos says in his suit.

What’s more, Criticos in his counter-argument accuses Ms Hill of breaking into his property and making away with valuables worth Ksh23 million while he was away in the United States.

The counter argument by Criticos was quickly rubbished by Hill who said that she did not to break into his property since they lived together and she did not need to break in as she had the keys and could access all parts of the premises.

“I have never stolen from him. He is lying. He left me high and dry without any concern for my wellbeing despite having lived together for eight years, where I supported him financially and emotionally,” she said.

Read: How to cope when a loved one commits suicide

The wounded Ms Hill also wants the court to compel the former MP to return all the household items she used to furnish their home including furniture, artifacts, beddings and kitchen utensils.

She further swore to the court that they started cohabiting in 2006 after falling in love. She says that she started lending the MP some money after he promised to refund her once he sold some of his properties.

“He approached me to rehabilitate his property known as Grogan Castle registered in the name of Kenya Trade Development Ltd. I agreed to renovate it at a fee which he signed of on before I began the work,” swore Ms Hill.

To support her claims, the plaintiff says that Criticos was so encouraged by her good work that he started paying her in kind in August 2010 by transferring 100 acres of his land in Taveta valued at Ksh40 million at the time to her.

She submitted to the court a letter dated August 6, 2010 from lawyer Walker Kontos on behalf of Criticos as evidence that the former MP had indeed agreed to surrender the portion of land and that the law firm had been instructed to institute the transfer.

See also: 5 professions that don’t give love a chance

She further says that she loaned the former MP Ksh11.8 million during the period that they were together which he acknowledged and promised to repay before their relationship became untenable in August 2014.

“He acknowledged in writing the debt owed to me, but he refused to pay me and instead alleged that I am a thief who stole his properties and firearm. On account of other amounts and the accrued interests he owes me Ksh25 million,”