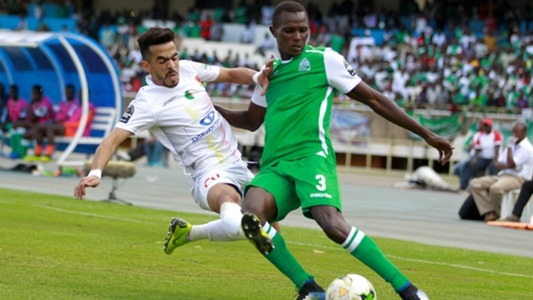 Gor Mahia vs Hussein Day. Gor Mahia will now be forced to play without five important contributors to their success so far in the competition.

Kenyan pride, Gor Mahia FC, again gave Kenyan fans a show for their money after they ousted Angolan Giants Petro de Atletico in an action filled match. The 12th player has always proved to be a crucial member yet again as they have inspired the team to win all their home matches in the Confederation Cup.

But this time the players showed that they can also fight for the team too when they sacrificed themselves for a win. The Green Army is known for fighting for what they want both literally and figuratively. Whenever things do not seem to be going well for K’Ogalo, the fans have always been there to ensure either Gor gets all the points, or both teams lose. This has time and again resulted in acts of hooliganism.

On Sunday, coach Hassan Oktay was also involved in the match shackles as he was second to be sent off by Moroccan referee Redouane Jiyed, after Ernest Wendo was red carded for a high boot on a Petro player, in the early stages of the game for dissent. The tactician seemed to be annoyed with his boys’ output and demanded more in the early stages of the match where he kept making highly animated gestures during the match. Gor’s Shafik Batambuze was red-carded later in the 77th minute for second bookable offence.

When Gor graced the pitch on Sunday, they knew getting out without a victory would mean they were out of the confederation cup but what inspired them more was the support they were getting from the home fans. K’Ogalo has neither lost nor drawn any home match as they have turned the Moi International Sports Centre to a Kenyan slaughterhouse where no team might want to face Gor Mahia from.

The support Gor gets is unmatched compared to other teams in Kenya. Only their perennial rivals, AFC Leopards get support of the similar nature but AFC fans’ support has been slowly decreasing in recent years. Gor Mahia has proved that fan support can win matches it does not matter how many players are on the pitch.

The only logical explanation that could explain their exemplary performance in the game despite not having a coach and also suffering two red cards. In a normal soccer match, a team with two red cards has very little or no chance against a full team.

K’Ogalo’s woes had started even before the match. The players had boycotted training and even threatened to boycott their KPL match against Kakamega Homeboyz last Thursday in Machakos on grounds that they had not been paid their salaries as well as stipends for their Confederation Cup matches. They, however, played their KPL match and even won 2-1 against the Homeboyz.

As they go into the quarterfinals, K’Ogalo is bound to meet a team that finished first in the group stage and because they cannot play El Zamalek, they should brace themselves for a meet up with either Morrocan side Renaissance Sportive de Berkane, Sudan’s El Hilal or Club Sportif Sfaxien from Tunisia.

Kenyan 17th time Champions should also work to improve their away form if they are to qualify for the semi finals of the CAF second tier competition. K’Ogalo qualified for the quarter-finals because they won all their home matches but they also lost all their away matches. In the knockout stages, if Gor meets a free-scoring side like Zamalek they might be eliminated by a heavy thrashing in the away fixture.

Gor’s goal on Sunday came via a penalty taken by Jacques Tuyisenge after Boniface Omondi was felled inside the box in the 56th minute.

With Zamalek drawing 0-0 against Petro Atlético de Luanda in the Angola capital also on Sunday to tie with Gor Mahia on nine points, the Kenyan team needed to score 6-0 to top the group on goal difference.

The defending KPL champions also face a hard task in the quarterfinal as they will have to play the first leg without five key players.  Shafik Batambuze and Ernest Wendo were both red-carded in the emotive clash while skipper Haron Shakava, Jacques Tuyisenge and goalie Fredrick Odhiambo were booked, ruling them off the next continental fixture.

Oktay, blames a language barrier for his sending off, says CAF needs to start sending referees who can communicate with both coaches.

At the final whistle, however, fans also invaded the pitch in celebration and it took police about 15 minutes to clear them before players can access the dressing rooms. This was a major security breach.