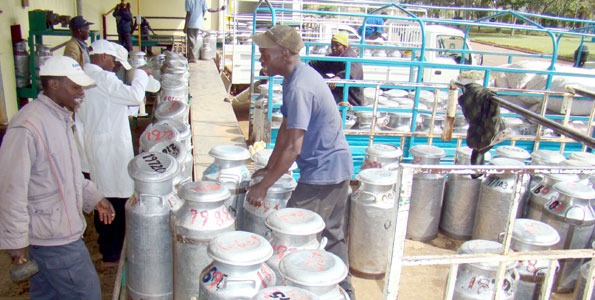 A section of smallholder farmers on Thursday called on Agriculture Cabinet Secretary Mwangi Kiunjuri and The Kenya Dairy Board (KDB) to do away with some of the proposed regulations aimed at streamlining the dairy industry.

Speaking during a press conference in Nairobi, the farmers led by agriculture technologist Elisha Bwatuti described some of the regulations as punitive saying they have the potential to turn dairy farming into a loss making venture.

“I need not say that the regulations signal tough times ahead for farmers. The business is already doing badly enough, the regulations will send most of the farmers out of work,” said Bwatuti who was flanked by Kenya Veterinary Association Chairman Samuel Kahariri.

The farmers are now calling on Kinjuri and KDB to set up a stakeholders meeting to iron out their differences in the next two weeks.

Asked on what action the farmers will take if Kiunjuri and KDB fail to convene a meeting within the given timelines Bwatuti said, “We are in the process of reaching out to all farmers across the country and explaining to them what this means to them, so I think we will sensitize the farmers on the ramifications of the regulations if they are implemented,”

{Read: Female malindi tout among the lastest millionaires in town}

On Tuesday, KDB was forced to suspend gazzetment of the regulations to allow for consultations after public uproar with the general consensus amongst Kenyans being that implementation of the regulations is a way to benefit cartels in the industry.

Some of the regulations include making it illegal to sell raw milk to neighbours and other customers. The regulation proposes that all milk be taken to a processor for pasteurization.

Another regulation proposes that farmers should only sell milk in bulk, it moots a scenario where farmers come together as a co-operative to sell their milk. If a farmer does not meet this threshhold then they cannot sell their milk.

The dairy board is also seeking to control the price at which farmers sell their milk.

Also proposed by the board is a tax of Ksh0.25 per every litre that every farmer sells.

If the regulations are implemented, it will also be illegal for farmers to buy farm equipment from dealers not authorised by the board.