The post says: “UPDATE: List of Shortlisted Nominated Candidates to the position of Solicitor General which is currently held by Kennedy Ogeto who was appointed during President Uhuru Kenyatta’s era.”

It goes ahead and lists the names as follows:

“After the PSC interviews slated for December 13 and 14, President Ruto will forward the name of the successful applicant to the National Assembly for vetting and approval,” the post adds. “The Office of the Attorney General (AG) Act provides that the Solicitor General will assist the (AG) in the performance of his duties.”

Business Today, however, confirmed that the candidates shortlisted by the Public Service Commission for the position are only eight. Interviews for the position started on 13th December, 2022.

We reviewed the PSC website, which has published the list of both applicants and those shortlisted for interviews. It emerges that what the Powerline Facebook page published as a list of shortlisted candidates is actually a list of names of the 18 people who applied for the job.

The first five candidates were slated to be interviewed on 13th while the rest on 14th December.

Below is a screen grab of the shortlisted candidates published on the PSC website. 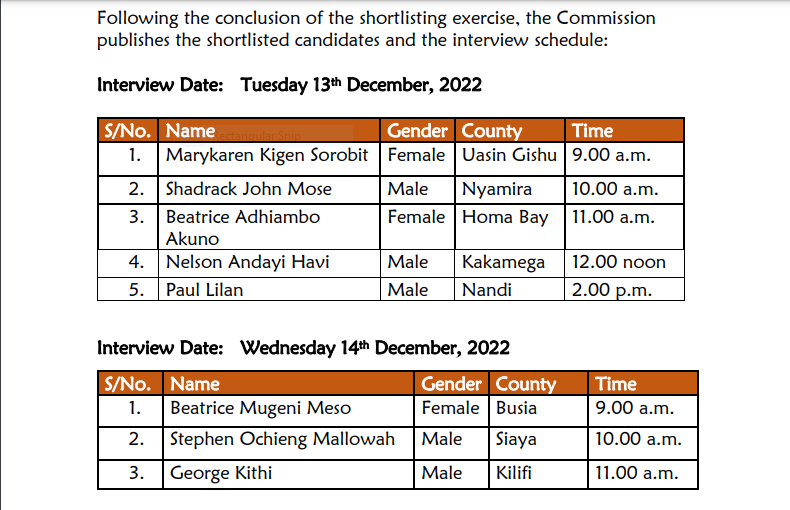 The Public Service Commission invited applications from qualified persons for the position of Solicitor-General on 1st November, 2022 and by the closure of the advertisement period on 14th November, 18 applications had been received as shown in this PSC official document.

According to Kenyan Law, the Solicitor General assists the Attorney-General in the performance of his duties and is also responsible for the discipline of the State Counsel and other members of staff in the Office currently headed by AG Justin Muturi.

The list of shortlisted candidates for the post of solicitor general published by the Powerline Facebook page is misleading as the PSC shortlisted only eight candidates.