Kenya’s top two daily newspapers – Nation and Standard – have been hit by court awards for defamation in what is clearly a revenge mission from the bench.  Both rulings were issued days apart by the same judge, Roselyne Aburili, in the cases that affected two of her colleagues, raising questions over whether she was truly fair in her judgment.

Lady Justice Aburili awarded Justice Alnasir Visram Ksh26 million against the Standard over a headline that she says prejudiced Visram’s quest for the position of Chief Justice in 2011.

In the Nation case, she ordered Nation Media Group (NMG) to pay a judge Ksh20 million damages for defamation in June for questioning why Lands and Environmental Court judge Samuel Mukunya’s name was left out of a list of those who had applied for the position of judges in the High Court and the Supreme Court based on an email claimed to be from Mount Kenya Law Society, but the regional bar association disowned the email.

The separate awards in different cases also spotlight the reporting and gate-keeping standards in newspapers, which are increasingly falling afoul of defamation laws. But it is noteworthy that the media has lately been critical of the bench especially during the vetting of judges and magistrates as well as vetting for the positions of chief justice and deputy chief justice.

It is the media, too, that brought down former deputy Chief Justice Nancy Baraza after reporting that she pinched the nose of a female  security guard at Village Market who had demand to screen her. 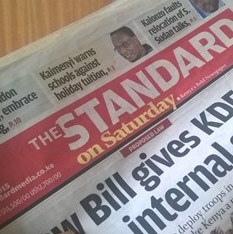 Justice Abuliri noted that the headline of an article published by The Standard and obtained from a report by the Law Society of Kenya (LSK) to the Parliamentary Committee on Administration of Justice and Legal Affairs damaged his reputation as a judge.

Mr Visram has also applied for the Judiciary’s top job and was interviewed by the Judicial Service Commission (JSC) on Monday. The judge noted that although JSC did not explain to Visram why they rejected his first application, the panel, she said, was “p******d” by the headline ‘Unfit for justice’ to believe that Visram was not the right candidate for the job.

The judge added that the newspaper influenced Visram’s interview session and that it caused him humiliation and ridicule in the eyes of the public.

“Although this court cannot find that the plaintiff lost the nomination by the Judicial Service Commission when he applied for the position of Chief Justice due to the publication as no report giving reasons for his rejection was produced in evidence, no doubt that evidence of his experience with the interviewer creates an impression that the interview panel were p******d by the screaming headline “unfit for justice” and that after all they were not the ones going to sanitise the plaintiff who was now being perceived as being unfit for justice,” the judge ruled.

Although Visram is quoted in the story dismissing the a*********s lodged against him by LSK, the High Court ruled that he was not given a chance to rebut the same. In her verdict, Aburili noted that one does not need to prove in court that one has lost one’s job or business to succeed in a defamation claim.

Nation Media Group had asked the court to settle the case at Ksh2.8 million, arguing that the Sh32 million sought by the judge was excessive. The judge instead settled the dispute at Ksh20 million, noting that the article depicted a misleading, biased, partisan and destructive press.

She noted that her colleague had built a reputation in the society over the years but the article meant that he was a person who could only get into a State office through favouritism. The Nation carried out two articles on Mukunya.

Aburili said the second piece was justifying the earlier one instead of an apology. Nation, however, told the court that the article was based on truth, justification and public interest.