Motorists driving saloon cars on the newly built Nairobi Expressway will pay between Ksh100 and Ksh310 depending on the distance traveled.

According to a gazette notice, driving on the road from Mlolongo (main entry) to the Standard Gauge Railway (SGR) station will cost Ksh160, same with traveling from Molongo to the Eastern Bypass exit.

Drivers will pay Ksh310 from Mlolongo to James Gichuru and Ksh260 from James Gichuru to Jomo Kenyatta International Airport (JKIA) and vice versa.

Driving from Mlolongo to Museum Hill, Westlands and James Gichuru and back will cost Ksh310, which is the maximum toll fee for the new road for saloon cars.

Those driving from James Gichuru to Capital Centre and Haile Selassie Avwill part with Ksh160 while those heading to Museum Hill will pay Ksh100.

Below is the payment schedule for the Nairobi Expressway, pegged on Ksh103.79 as the standard price for the US dollar. 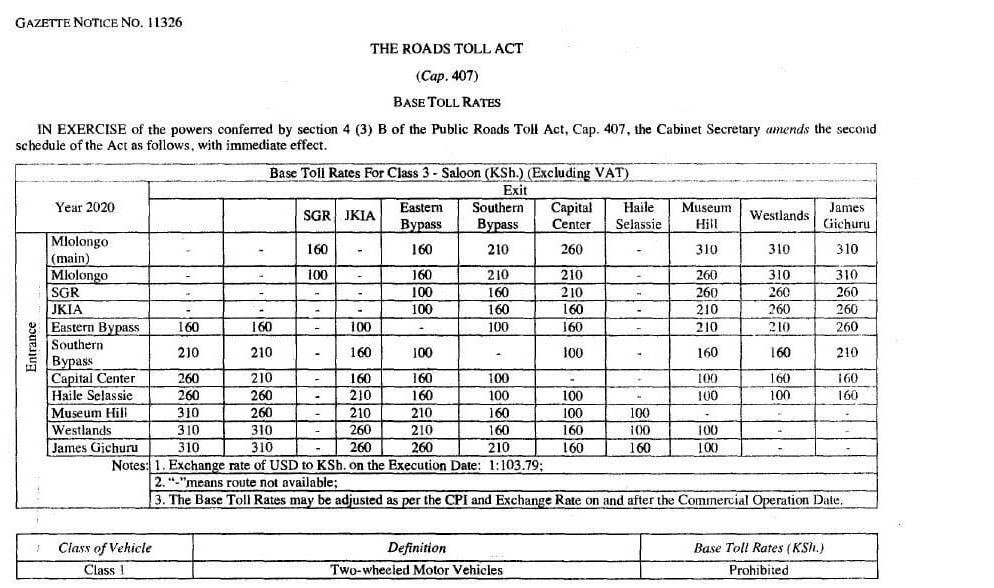 The Kenya National Highways Authority (KeNHA) on Monday announced that there would be guided trials to test the operations of the system that has been installed before the road is open to the public.

“Contrary to speculative information circulating in some social media platforms, this is to notify the public that the Nairobi Expressway is not yet open to traffic,” KeNHA said.

“As the contractor nears completion, and in preparation for the eventual opening of the Road to the public, there will be guided trials to test the operations of the system that has been installed.”

It is projected that saloon cars which constitute 80% of all cars that use that route will cover a large percentage of the costs.

The Kenyan government is expected to shoulder 25 percent of costs with the Chinese government providing for the majority chunk of capital expenditure.

Motorists will bear the cost of Ksh.46.7 billion in principal repayments to the Chinese over the 30 year concession period which carries a three-year grace period on repayments. Revenue generated from toll collections are expected to rise to Ksh10.6 billion in 2049 from Ksh.2.1 billion in 2023.