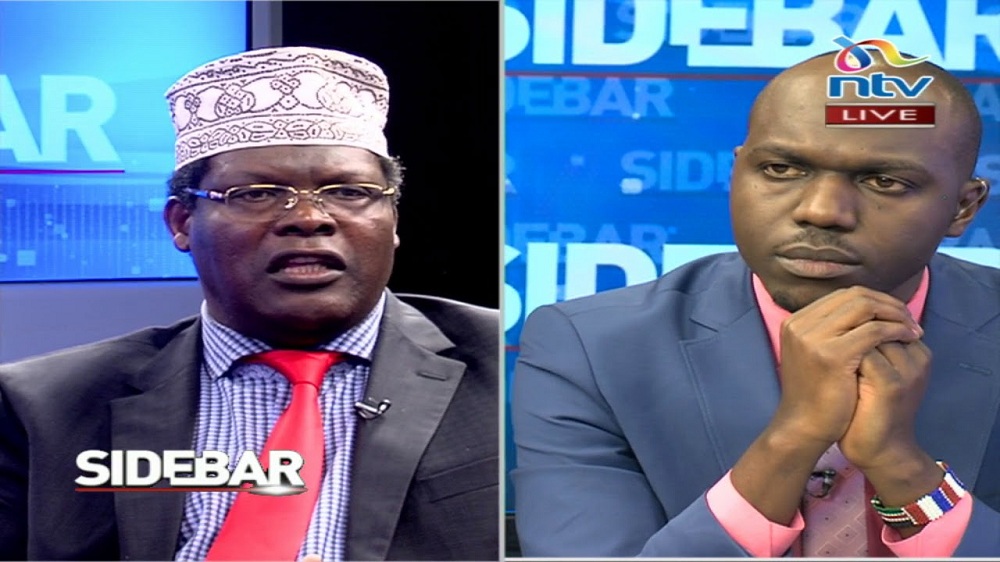 Kenyans are expressing their anger agaist NTV journalist Larry Madowo for allegedly not being ‘professional’ in a national TV show.

Things started going out of hand when Madowo played a video clip of President Uhuru and his Deputy William Ruto insisting elections are still on, then asked Miguna what he made of it. “I see demagogues,” responded Miguna

It’s at this Juncture that the leader of Majority in the Senate Kipchumba Murkomen and advocate Jeniffer Shamala jumped in to defend the president, terming Migunas reference (demagogue) as an insult and disrespect to the president.

However, things went from bad to worse when Miguna said that ‘you can’t have a revolution without blood’, angering the host who cut him short asking him to clarify whether he is advocating for violence. After a heated exchange of words Madowo denied Miguna a chance to clarify his statement.

NTV later tweeted a clip of Madowo “banning” Miguna from the show, in which he responded: “The Githeri media is trying to distort facts. Larry Madowo cannot ban me from anything. I left his MEDIOCRE and COMPROMISED show.”

“Mr. @LarryMadowo is NOT a journalist. I’m not appearing on his show again. He must adhere STRICTLY to the provisions of the Media Act, 2013,” he added.

Madowo has since received the fair part of criticism from both viewers and other professionals, putting in to question his journalistic skills.

People Daily reporter Gitahi Ngunyi wrote on Facebook, “SIDEBAR LAST NIGHT. Larry should learn to listen. What he did to Miguna Miguna was a lesson on how not to moderate a talk show. How do you shut up a guest because you don’t understand simple words like revolution and demagogue?”

A twitter user Lloyd Onyango tweeted, “When you invite people for debate they come with free mind and opinion and you can’t purport to control what they say.”

Apa Nakim tweeted, “I was thinking this will be a hit show because the panel was incisive and ratings puller. I WAS WRONG.”

According to Victor Kimuyu, the people who don’t read are the ones thinking demagogue is an insult. “I was shocked Larry doesn’t know what “demagogue” means,” he said.