In 2018, Wanuri Kahiu’s controversial and critically-acclaimed film Rafiki was banned in Kenya even before its release. [ Photo / Sinema Focus PR - Getty Images ]

From King Kaka’s TRACE Live music event on Showmax to beloved African titles like Selina and Gomora, there is so much content to watch on Showmax to celebrate our own stories as told by our own. And if you haven’t made up your mind on what to watch, may we recommend checking out films by these award-winning filmmakers who are revolutionizing the film industry in Kenya, and taking content in Africa to the next level?

Wanuri Kahiu has always been a disruptor. In 2009 she wrote and directed the short Pumzi, Kenya’s first sci-fi film, which won Best Short Film at the Cannes Independent Film Festival. In 2018, her controversial and critically-acclaimed film Rafiki was banned in Kenya even before its release.

Recently, she’s been linked to three Hollywood projects that include directing an adaptation of the upcoming debut YA novel The Black Kids; The Thing About Jellyfish starring Stranger Things’ Millie Bobby Brown; as well as co-writing the pilot for Octavia Butler’s Wild Seed TV series with Africanfuturism writer Nnedi Okorafor.

Now one of the most sought-after filmmakers in Kenya, Wanuri came into the spotlight in 2018 with From a Whisper, her first feature film which follows the aftermath of the 7 August 1998 bombing of the US Embassy in Nairobi. From a Whisper won five awards at the African Movie Academy Awards, including Best Picture and Best Director for Wanuri.

In 2018, Likarion Wainaina directed Kenya’s first-ever superhero film Supa Modo, a movie that packs an emotional punch with the heart-warming tale of a terminally ill nine-year-old, Jo (Stycie Waweru), who has dreams of becoming a flying superhero. When Jo is discharged from the hospital to spend her remaining days at home, her headstrong sister Mwix (Nyawara Ndambia) convinces the whole village to come together to make her dreams come true.

Having won his first award in filmmaking in 2014 while still a student at Kenyatta University, Njue Kevin’s biggest moment came in 2018 when his debut feature film 18 Hours made history at the Africa Magic Viewers’ Choice Awards in 2018.

A first for any Kenyan film at the AMVCAs, 18 Hours was nominated in four categories, winning three of them, including the highly-coveted Best Overall Movie, beating Nollywood favourites like Shirley Frimpong-Manso (Potato Potahto).

Inspired by true events, 18 Hours follows two rookie paramedics – played by Brian Ogola (Lusala) and Nick Ndeda – racing against time to save the life of a road accident victim, even after they are denied admission in several hospitals in Nairobi.

Mbithi Masya, a former member of Kenyan funk band, Just A Band, made his directorial debut in 2016 with Kati Kati, a film that tells the story of Kaleche (Nyokabi Gethaiga), a woman who wakes up in a mysterious resort with no recollection of who she is or how she got there. We soon find out that she is dead and living in the afterlife where she meets other wandering souls.

Selected as Kenya’s entry to the 2018 Oscars, Kati Kati was nominated for numerous international awards and won the International Critics’ Award (FIPRESCI) at the 2016 Toronto International Film Festival and a 2017 Africa Magic Viewers’ Choice Award for Best Movie – East Africa.

Like Njue Kevin, Denis Maina was another history-maker at the AMVCAs in 2018. His eye-opening documentary The Flesh Business won Best Documentary, making it the first documentary from Kenya to ever be nominated and win in that category at the AMVCAs. The Flesh Business is a one-hour documentary that sheds light on the rampant prostitution at the Kenyan coast from the point of view of the commercial sex workers – what led them to that life, what they have to go through to please their masters and the major players calling the shots.

NEXT >> Previously Rejected Kenyan Movies Find a Life on Showmax 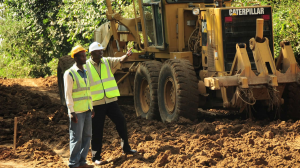