The time taken to commute between Nairobi City Centre and Jomo Kenyatta International Airport (JKIA) is set to reduce with a JKIA-CBD railway line linking the two destinations set to be complete by 2021.

The rail line is part of the trade arrangements between Kenya and France that will total Ksh340 billion in a series of public and private infrastructure deals announced by President Uhuru Kenyatta and France President Emmanuel Macron on March 13.

In a bid to also decongest traffic in Kenya’s capital city, the JKIA-CBD railway line will also seek to reduce the time taken between the city center and the country’s foremost international airport.

The distance between JKIA and Nairobi City center is at most 20km and should take between 30 minutes to less than an hour. Travel time however ranks up to two hours due to traffic on the usually busy Mombasa Road.

Kenya and France are also negotiating a Ksh181 billion contract to improve a highway from Nairobi northwest to Mau, AFP reported. The highway forms a busy stretch of road for passengers and freight and is among the country’s deadliest.

President Macron said the French Consortium handling the JKIA rail line will play its part in providing a mobility solution for Nairobi.

At the same time, President Kenyatta revealed that his government had set aside Ksh10 billion for the rehabilitation of four existing lines. The railway improvement will occur on lines with the heaviest passenger-carrying potential.

With the start point being the Nairobi Central Station, the four destinations that will be rehabilitated with the Ksh10 billion are lines heading to Ruiru, Embakasi Village, Kikuyu and Kitengela.

“The investment also provides for the acquisition of refurbished Diesel Multiple Units (DMU’s) and the rehabilitation of the meter gauge railway network and the development of new stations as well as the building a public transport network that straddles from Ruiru to Athi River,” Uhuru’s communication unit added. 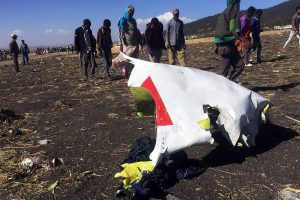