Former Nairobi Governor Mike Sonko on Monday June 15th 2021 shared details of a missing aircraft on his Facebook page. He reported that the domestic aircraft had lost communication with the tower and went missing from the radar for sometime due to “negligence” by air traffic controllers.

A fact-check by Business Today has, however, found the claim FAKE after the Kenya Civil Aviation Authority (KCAA) dismissed the report.

Mike Sonko, who was pushed out of office through impeachment, had said: “A domestic aircraft reportedly lost communication with tower and went missing from the radar for sometime due to negligence by some careless air traffic controllers. He threatened to expose those working in the aviation industry should such an incident occur again. 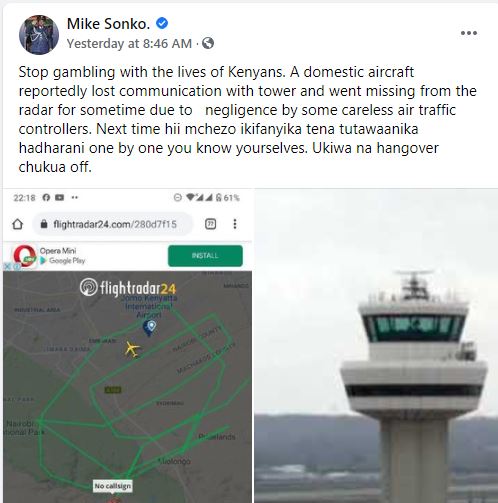 “Next time hii mchezo ikifanyika tena tutawaanika hadharani (if this happens again we shall expose you) one by one, you know yourselves. Ukiwa na hangover chukua off (if you got a hangover please take off from work),” he wrote.

KCAA communications officer, Mercy Mbaka, described the allegations made by the former governor as “fake news”, explaining that no such thing had happened.

“KCAA would like to clarify that no such incident occurred. We are in contact with all air operators in the country and none has reported such an incident,” Ms Mbaka said. “We wish to assure all our stakeholders that KCAA is fully in control of our airspace through our Air Traffic Controllers and all air navigation facilities are up to date and functioning well.”

VERDICT: The Kenya Civil Aviation Authority has indicated no aircraft was reported as missing, making the details shared by Mike Sonko FAKE news.

See >> Who established Capital FM? Of Course Not Chris Kirubi