Bizna Kenya’s SME awards and Young Entrepreneur’s awards have been feting businesses and entrepreneurs and putting them on the map.

The idea of recognising these individuals who are struggling to get their businesses up and running was originated by Bizna Kenya’s founder, Tonnie Mello. He started Bizna Kenya as an online platform to help, promote and support small businesses.

Alongside business consultancy, membership, and coaching, Mello is also a fourth-generation entrepreneur having earned the skill from his father. According to him, his understanding of the entrepreneurship world helps him relate to the issues the Small and Medium-sized Enterprises (SME) face.

Having gone through the same journey in business, the Bizna Kenya founder sort to help create awareness about the Kenyan SMEs with his online platform. In an exclusive interview with a business today reporter, Mello said he felt that no one was talking about the SMEs and felt the need to do so.

“Everybody else is talking about the big guys. People like recycling stories yet there are a million untold stories about SMEs. They may not be successful as the big guys but someone has to tell their story. These stories are different,” Mello noted.

However, constantly covering stories about the SMEs was not enough. There was still a need to create other platforms that will recognize these businesses and create awareness about them. This was the reason Bizna Kenya introduced the Bizna SME’s awards and the Young entrepreneur’s awards.

“Writing about them was not enough. You have got to create other avenues for engagement and be able to create that visibility.” the Bizna Kenya founder commented.

Mello noticed a difference with the Bizna awards as they were creating more awareness. The businesses earned recognition without much effort from the award organizers.

The organizers first asked for nominations where people either nominated themselves or nominated others to participate in the awards. The successful ones were then chosen after lengthy scrutiny of the businesses. A lot of activity then took place after the final list was released as people were pushing for awareness, for programmes and for the nominees to be voted for.

“Even if you have been in business for years, there is some validation that comes when people celebrate you. It gives you extra motivation and inspiration for your business,” Mello said citing an SME that received its first award after being operational for 34 years.

With the experience he has in entrepreneurship, Mello advises entrepreneurs to get their business online as they are more likely to get recognition.

“Given the current market and economy, opportunities are few but when you venture into the digital world you will find opportunities opening up,” he advises, “Personally, I would urge more people to get online because at the end of the day everyone is online and that is where you can find people easily.” 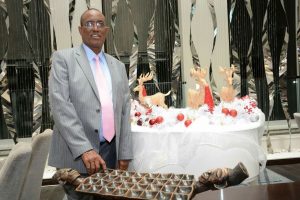 Mix-up that Saw Uhuru Appoint Dead Man For Big Government Job
Through a gazette notice published on 16th October 16, the…