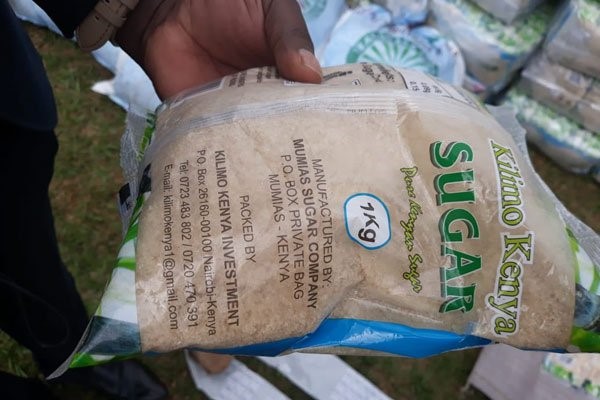 Kenyans may have been consuming poisonous substances like copper, mercury, yeast and moulds in what is branded as genuine sugar and sold in supermarkets and retail joins countrywide.

An analysis on samples of the 1,400 bags of illegal sugar seized by police in different operations, reveal that some of the sugar contains contaminated water insoluble matter. The tests carried out at the government chemist and whose results Interior Cabinet Secretary, Fred Matiang’i has termed as ‘shocking’ reveal the dangers that Kenyans have been exposed to, since the contents of the sugar, medics say, are capable of causing some types of cancer and harming internal organs.

Despite the sacks of the sweetener being marked as ‘not safe for human consumption’ unscrupulous businessmen packaged them in 1kg and 2kg packets, disguised as local brands among them Kabras, Mumias Sugar, West Sugar and Kilimo Kenya.

World Health Organisation (WHO) indicates that elemental mercury are toxic to the central and peripheral nervous systems. The international organisation also indicates that ingestion and inhalation of mercury vapour can produce harmful effects on the nervous, digestive and immune systems, lungs and kidneys, and may be fatal.

“The inorganic salts of mercury are corrosive to the skin, eyes and gastrointestinal tract, and may induce kidney toxicity if ingested,” WHO states.

Neurological and behavioural disorders may be observed, with symptoms including tremors, insomnia, memory loss, neuromuscular effects, headaches, cognitive and motor dysfunction. Copper poisoning on the other side, can damage the liver and kidneys.

Apart from the toxicity of the commodity, inspection commissioned by the Directorate of Criminal Investigations, Kenya Bureau of Standards (Kebs), National Environmental Authority, Kenya Revenue Authority and other agencies could not ascertain the origin. It was also soiled, indicating that it was poorly handled and was stored in a dirty condition.

On Wednesday, Dr Matiang’i inspected another 1,365 bags of illegal sugar that was nabbed from warehouses in Eastleigh, Ruiru and Nairobi’s Industrial Area. Machines used to package and repackage the illegally imported sugar were also impounded in the police operation.

The sugar approximated to be worth Ksh13.7 million was recovered from Beder Stores in Eastleigh and Paleah Stores at the Ruiru bypass.

At the Paleah Stores, 581 bags of sugar each weighing 50Kg and labelled Brazil, 49 bags labelled Zambian Sugar, 238 bales containing 10 packets of 2Kgs each, 132 bales containing 20 packets weighing 1kg each, 8 bags of unlabelled sugar and 409 bags purported to be from Nzoia Sugar were confiscated.

A mixer machine which the Director of Criminal Investigations George Kinoti said was being used for mixing genuine and harmful sugar before packaging was also found at the warehouse.

Detectives suspected the warehouse which also had fake Kebs stickers belongs to the husband of a Kirinyaga politician who works with powerful individuals peddling the commodity.

Although Mr Kinoti did not mention the names of the people suspected to be involved in the illegal business, he said some people arrested so far will aid in the investigations that will see the arrest of the main barons running the complex syndicate.

“Apart from the dealers, we are investigating how illegal products manage to pass through the points of entries undetected. We believe that the unscrupulous businessmen conspired with officials who should be protecting Kenyans,” Mr Kinoti said.

The Standards Act under Section 9, criminalises the manufacturing of sugar under the conditions that the contraband sugar was being produced. The businessmen did not comply with labelling requirements and practices as required by the law. They also used the standardisation mark from Kebs without authority as required under Section 10 and 15 of the Standard Act.

The war on counterfeit and contrabands, Dr Matiang’i said, will continue, until the consumers are assured of the quality of goods they are consuming.

“We are not relenting. A month ago President Uhuru Kenyatta directed an operation to deal with economic crimes in the country,” Mr Matiang’i said, adding that the discovery about the content of the sugar was shocking. “What we are doing to our country and what we are doing to ourselves is shocking,” the CS said.